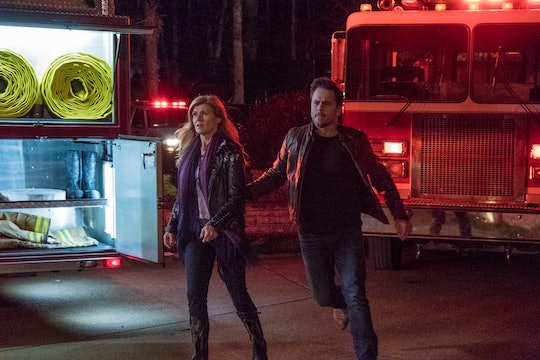 'Nashville' Stirs Up Drama For Rayna And Deacon

Deacon and Rayna have been going strong, more or less, since their Season 4 wedding on Nashville. There was a little hiccup when Maddie filed for legal emancipation as a minor and used Deacon's history of alcoholism and rage-outs to successfully make her case, but once Maddie agreed to move back home, Rayna and Deacon seemed back on track. Now, their new lovechild — the relationship memoir duet record they're writing together for Highway 65 — is causing trouble. So are Rayna and Deacon breaking up on Nashville? Things are definitely tense in the Claybourne-Jaymes household.

It all starts when they begin working on the new album in earnest. Long, formal, sit-down writing sessions together, accompanied by the world's most annoying videographer, Gene (a Zach Welles hire for bonus album #content, of course), cause obvious frustration. Rayna starts to notice that she and Deacon have very different recollections of the early days of their courtship. For Deacon, it was hopeless romance, and for Rayna, it was the endless frustration of trying to navigate a relationship with a self-destructive, untreated alcoholic.

Deacon tries to lighten the mood by spontaneously carting Rayna off to...a bowling alley (okay, he didn't really think it through), and they do briefly flirt with the idea of getting a motel room together for old times' sake. But an emergency back home (Maddie + Clay + Daphne + adolescents baking cake unsupervised = disaster) spoils their fun. They rush back to deal with Maddie and, while nothing seriously bad happened, Rayna and Deacon are still too frazzled to work.

They head to one of their old haunts, a rooftop in Nashville, and Deacon suggests they take a break to write some stuff on their own before returning to the table with the stuff they've produced. It's super triggering for Rayna, who doesn't see how you can write a duet album separately, and feels like he's quitting on them, yet again. Deacon tries to fight back against opening up old wounds, but Rayna points out that he's thinking about it wrong.

"I don't want to be afraid of who we are," she says in what is easily her best and most insightful line of the season. "I want to be able to touch our pain without having to hurt each other."

After spending a night apart (in separate bedrooms of the house), Rayna and Deacon return to each other, each having written a little something for the album. Of course, their pieces fit together perfectly and the episode ends with them recording the track, adorably titled "My Favorite Hurricane." It looks like their relationship is going to be on much more solid ground these days than its network TV iteration. It can stand up to a little dramatic tension every now and again.