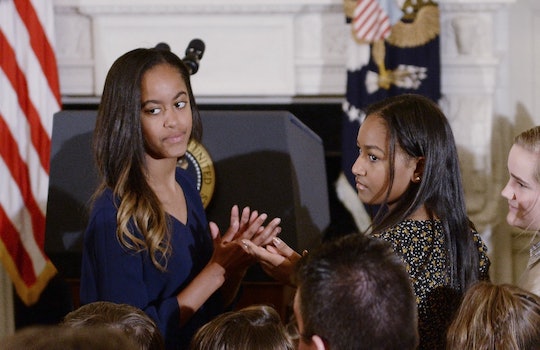 Are Sasha & Malia At Trump's Inauguration?

It's President-elect Donald Trump's Inauguration Day, and the Obamas have now spent their final night at the White House. Although the family is moving on to exciting things, they have one final event to get through: the inauguration. But while Obama and Michelle have both been spotted there, their two daughters have yet to be seen. This has led many to wonder, are Sasha and Malia at Trump's inauguration?

They haven't been seen at the inauguration, prompting many to ask about their whereabouts on Twitter. However, according to Town and Country, the Trumps attended tea at the White House with the Obamas, where Sasha and Malia may have shown Trump's children around the estate. (Apparently, that was a role the Bush sisters carried out for the Obama girls.)

After Obama and Michelle wrap things up at the inauguration, the whole Obama family will be flying down to Palm Springs, California in order to unwind before they move into their new home, according to CNN. "[Obama] and his family have enjoyed the time they spent there in the past, and they're looking forward to traveling there on Friday," Josh Earnest, the White House press secretary, told CNN on Tuesday.

Whether they attended the inauguration or not, Sasha and Malia have remained optimistic about the country's political future, according to their father.

"They were disappointed," Obama told the press about his daughters' reactions to the election in January. He continued:

They paid attention to what their mom said during the campaign and believed it, because it’s consistent with what we’ve tried to teach them in our household, what I’ve tried to model as a father with their mom, and what we’ve asked them to expect from future boyfriends or spouses.

Hopefully Sasha and Malia — along with their parents — enjoyed their last night in the White House, and are looking forward to some downtime in Palm Springs. After eight years, it's certainly deserved.