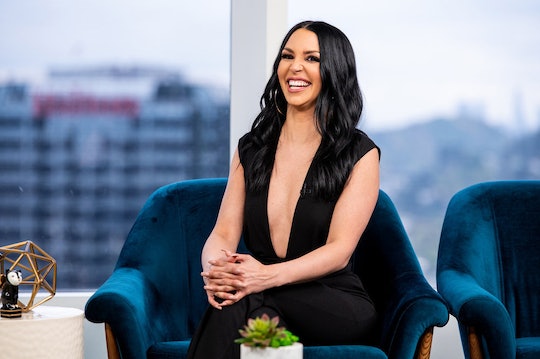 Vanderpump Rules start Scheana Shay dipped her toe into The Bachelor dating pool when she began dating Adam Spott, the roommate of Season 12 Bachelorette star Robby Hayes. The pair's relationship is confusing, to say the least, so it's fair people aren't sure whether Scheana and Adam are still dating today.

Scheana and Adam are in this ongoing will they or won't they stage in their relationship, even though they consider themselves to be "best friends" and are sleeping with each other. Given their easy connection and great sexual chemistry, it's a bit difficult to figure out why they haven't pulled the trigger on a full-blown relationship. And what's especially confounding is how long this dance has gone on for — the two have been in this weird yet all too common limbo since 2018,

So, have the two finally figured out their relationship? The answer is ... not quite.

"I don't know. It's complicated," Scheana explained to Too Fab on Monday, April 15. "We try and go back to just being friends, but then we hook up again. It's been this cycle for like 10 months now, and it needs to end or become something more."

It seems like Scheana and Adam are currently in the "just friends" stage of their relationship cycle because as of late, they haven't shared many photos one another to Instagram.

The last pic Scheana posted of the two was in March, when she shared one of their Vanderpump Rules promo shots.

It's not clear whether Adam of Scheana is responsible for the stalemate nature of their relationship, but it's obvious things aren't going to get less complicated anytime soon. Case in point: On Monday's episode of Vanderpump Rules, Scheana tries to make Adam jealous by going out with another model. Oops.

If Scheana is trying to draw a relationship out of Adam through jealousy, it probably won't work. But there's a good chance Scheana doesn't actually want a commitment out of her friends with benefits situation because she sounds content with being single for now.

Although Adam and Scheana aren't in a committed relationship, the two are very supportive of one another. Want some proof? Look no further than Scheana's anecdote about how Adam accompanied her to one of her egg freezing appointments. Considering these appointments can be intense, Adam probably deserves some props for tagging along.

Truth be told, however, the visit didn't 100 percent smoothly. Scheana, who was sleeping with Adam at the time, recalled to Too Fab:

It was an ultrasound day, and we were like, 'Wait, there's no baby, right?' And the nurse wasn't answering me! And I'm like, 'Is that an ovary? What is that?! What am I looking at?!' Adam was like, 'I'm here to support you, but I will never come back to the doctor's office with you again.'

Well, I can't say I blame him for that reaction — talk about an intense situation.

No matter what happens with Scheana and Adam, it sounds like they'll always be friends no matter what. As for their romantic connection? That's still up in the air.