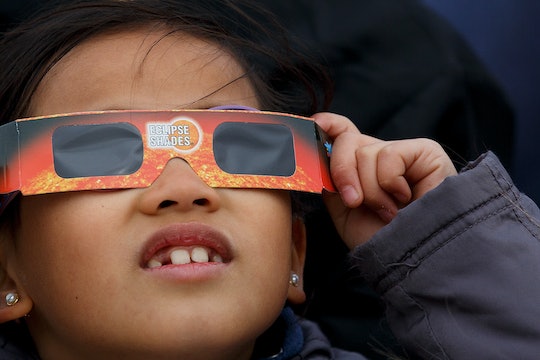 On Aug. 21, there’s going to be a total solar eclipse, visible across the United States. It's kind of a big deal, and people across the country are preparing to see the event — including teachers. Because the solar eclipse is on a Monday, a lot of kids will be in school when it happens, and some teachers are trying to work the event into their schedule for the day. So, are schools giving students solar eclipse glasses? It's not safe to look at the solar eclipse without special glasses, and as it turns out, your kid might need a permission slip to view the eclipse at school because of the danger of eye damage without them.

The Wichita Eagle reported that school districts in Wichita, Kansas, are sending letters and e-mails to parents and families outlining the precautions they plan to take to protect students against eye damage during the eclipse, and that most are requiring parents to either sign consent or opt-out forms for their kid(s) to participate.

According to The Wichita Eagle, the Derby district, south of Wichita, has about 7,500 solar eclipse-safe glasses for students and staff to use during the event, thanks to donations from area businesses and some district funds.

But not every district is able to provide the glasses — at least not on that scale. The State Journal-Register in Springfield, Illinois, reported that in Springfield School District 186, some schools have obtained solar eclipse glasses that meet all safety standards, but others have opted to keep their students indoors for safety reasons. For the ones that are going to have students view the eclipse, in order to do so, students need signed parental permission.

In New Orleans, Louisiana, different schools are taking different approaches to the eclipse. Three Catholic schools in the area will be closed Monday for the eclipse, The Times-Picayune reported. And other school districts in the New Orleans metro area asked schools to do eclipse viewings using the NASA livestream, instead, which would keep students inside and remove the possibility that they could damage their eyesight looking at the eclipse.

That outlet reported that some schools have eclipse glasses and are planning to stage events outside — but with precautions. For example, a permission form for the Jefferson Parish School System's eclipse viewing states that students will take turns outside under teacher supervision to watch it, but that schools without the approved glasses will have to use the NASA broadcast for viewing instead.

It's understandable that a lot of schools want students to view the eclipse, and that kids are excited about the event. According to The New York Post, this is the first time since February 1979 that a solar eclipse will occur over the entire country. The publication spoke with Bill Nye, also known as “Bill Nye the Science Guy," about the event, and he said:

It’s a little unusual. There are a pair of solar eclipses every two years, but this one is going right across one of the world’s most populous countries — not over the ocean or over the Arctic Circle but right across the US. You couldn’t design it any better.

But he also made the point that The Planetary Society, of which he is the CEO, ran out of special glasses to view the eclipse. "The suppliers couldn’t meet the demand," Nye said.

And that's been a problem for many seeking out glasses to safely view the eclipse. THV11 in Arkansas reported that several stores in the central Arkansas area are completely sold out. The American Astronomical Society has a list of "Reputable Vendors of Solar Filters & Viewers" that have been certified as safe to use, but many of the vendors are sold out, and some of the products available online are expensive or only available in bulk orders.

So it's a little unfair if schools don't have the glasses to try to schedule for students to watch the eclipse, since they're not exactly easy for parents or teachers to obtain at the moment. But it sounds like most schools that are trying to include viewing the eclipse as part of the school day already have the glasses, or they've found other ways to incorporate the big celestial event into the curriculum for the day.