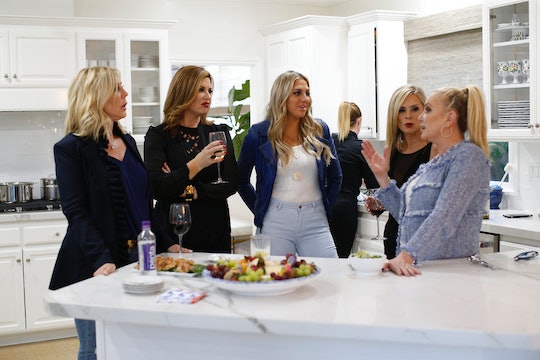 Gina & Shannon Aren't The Best Of Friends On 'RHOC'

Gina Kirschenheiter is new to The Real Housewives of Orange County, but even several episodes into Season 13, she hasn't been able to connect with every woman in the cast. Though Gina became fast friends with Emily Simpson and Kelly Dodd, the same can't be said for her and Shannon Beador. But there's always the possibility their relationship got better after filming, so are Shannon Beador and Gina Kirschenheiter friends after RHOC?

It doesn't look like it. It's not clear where the trouble between them began, but it hasn't improved with time. Perhaps Gina's ongoing divorce and her lack of regret over it brought up bad memories that Shannon associations with her own separation; maybe Shannon simply found Gina's dinnertime conversation too feisty. Regardless of the cause, the effect is the same: Shannon and Gina are simply not friendly.

Gina spoke with The Daily Dish podcast about how she was adjusting to her first season on the show. She noted that she was friends with Emily and Kelly, and she always found Tamra Judge really supportive. Even though she had a brief disagreement with Vicki Gunvalson, they were able to work it out and gain each other's respect. But it seems to be a different situation with Shannon, with Gina revealing that they essentially don't speak at all.

That's not for lack of trying either, at least on Gina's part. As she told the podcast:

I have zero relationship with Shannon. The last attempt I had with Shannon to connect with her, because I'm like, let me still try... I texted her, I asked her to go to lunch, we made a date, I texted her the night before to confirm, she texted me an hour before we were supposed to be there to tell me she couldn't make it, and I had a babysitter, so I paid for a babysitter, and then that evening, she went to dinner to The Quiet Woman with Kelly Dodd and put it all over social media.

It didn't leave Gina with a very positive impression of Shannon. Gina went on to say that it was "pretty clear that [Shannon] goes out of her way to not be gracious or kind to any of the new people that are ever in the series, and I think that's deplorable and I think that she's a bully."

Shannon has previously quarreled with past newbies Lydia McLaughlin and Kelly Dodd, though she did eventually become friends with Kelly. Shannon confirmed that Gina's statement about their lack of friendship was "quite accurate" while talking to AOL. She also said that she has trouble getting along with the new cast members because she doesn't like change. In a Bravo blog post, Shannon added that she was too "swamped" to find the time to get to know them, but Gina was unconvinced.

In response, Gina told BravoTV.com, "I am pretty sure even the busiest of business moguls have the time to perform common courtesy, so her excuse is just totally bogus and offensive."

There's always a chance that Gina and Shannon could work things out in the future, but right now it looks like they're going to keep their distance.