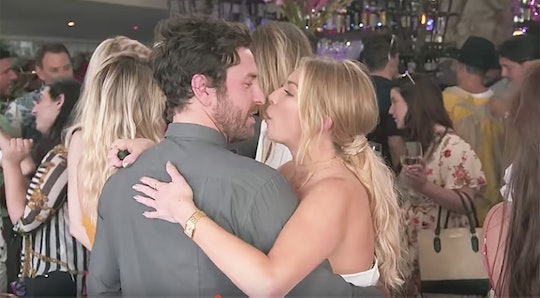 Vanderpump Rules star Stassi Schroder recently got out of a dark relationship (does the name Patrick ring a bell?) and started a fresh romance with Beau Clark. Many fans love the new couple and are rooting for them to work out in the long run. And if you fall into this category, there's a good chance you'll be thrilled to know that Stassi and Beau are still together.

Stassi's on-and-off boyfriend Patrick humiliated her last season when he made gross and inappropriate comments about Lisa Vanderpump's butt. Making matters even worse? He made the creepy remarks in front of a horrified Stassi. It was a miserable moment, to say the least.

Lisa, who is not one to mince words, said about Patrick's antics, according to the Daily Dish: "I thought he behaved like a dickhead, I really do. He said something like, 'Oh, yeah, we've met before, and I enjoyed seeing the back of you.'"

Luckily, Stassi moved on from Patrick and into Beau's waiting arms. The two made things Instagram official on Valentine's Day 2018, and they've have been inseparable ever since.

Of course, Stassi and Beau's relationship isn't perfect. Case in point: On Monday night's episode, Stassi drives Beau to tears during her joint birthday party with Ariana Madix. Apparently, Stassi wasn't thrilled that Beau decided to hang out at the party after she decided to leave.

"He cried on camera," Stassi shared about the uncomfortable moment in December 2018, according to the Daily Dish. "I just can't help myself. When I get super hammered, I just can't help it."

Given Stassi's past drunk performances, I'm not too surprised Beau broke down on camera. Drunk Stassi is not someone I'd want to tango with.

Stassi elaborated on her behavior, saying:

Everyone's starting to call it the 'dark passenger;' once the clock strikes midnight, it's like something comes over me and I want to go to bed, I'm done, I'm demanding him go to bed with me, and he's a social butterfly so he likes to be out and around my friends, and it's like I'm Dr. Jekyll and Mr. Hyde or some sh—t.

To be fair, I think it's safe to say everyone has a dark passenger or two when shots are involved.

Fans will probably be relieved to know that their boozy fight wasn't a relationship ender.

"You just stick with it," Beau said about Stassi's flair for drama, according to The Daily Dish. "It's like a hurricane; once the hurricane's passed through, the next day, it's all sunny and nice. There's a little debris everywhere, but, you know, you just sweep it up a little bit later."

It sounds like Beau is in it for the long haul, dark passenger or not. And I don't know about you guys, but I think an engagement is right around corner. Get it, Stassi.