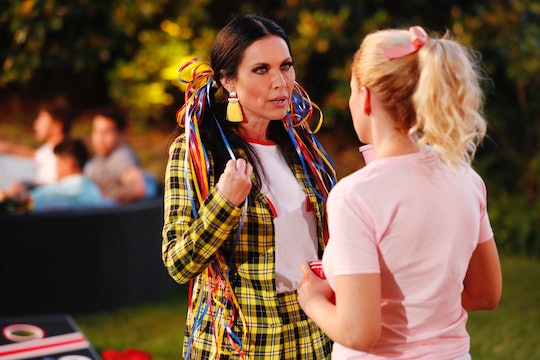 The Real Housewives of Dallas Season 3 opened with Stephanie and LeeAnne enjoying a surprise bonding sesh at D'Andra and Jeremy's anniversary party. But are Stephanie Hollman and LeeAnne Locken really friends? Despite the fact that Stephanie is often put in the middle by her closer friends who are sworn enemies with LeeAnne, it does seem like the pair have managed to keep close.

When D'Andra revealed that she was too busy to go wedding dress shopping with LeeAnne — much to LeeAnne's shock and dismay — Stephanie was on-hand to fill in. "I'm just waiting on her to ask me to be a bridesmaid," Stephanie said in a cutaway interview. "That's how much I feel I'm in the inner circle right now."

LeeAnne tweeted after the episode aired warning Stephanie to be careful what she wishes for, but in a later interview with Bravo's The Daily Dish, LeeAnne admitted that she probably wouldn't have any bridesmaids IRL because Rich doesn't have any groomsmen.

"There probably won't be any bridesmaids or groomsmen because Chris Kyle was murdered and that was Rich's best friend. And so I wouldn't want it to be unbalanced," she explained. "Rich and I are each other's family. We're all each other has had for so long, for eight years, almost nine years. We really don't need anyone else."

But it does seem like, in D'Andra's absence, Stephanie has stepped up to be a source of support for LeeAnne. She also recently renewed her vows with Travis, so she's probably full of helpful wedding planning tips. In any case, the two have come a very long way from LeeAnne dressing up as "Two-Faced Stephanie" for her Halloween party last year, and it seems like they're keeping that forward momentum going.

Early on in Season 3, the pair bonded over their mutual struggles with depression and suicidal ideation when Stephanie declined more champagne at D'Andra's anniversary party. She confided in LeeAnne — and revealed for the first time publicly on the show — that feeling too hungover can send her into a depressive spiral. She was worried about reaching a troubling point in her mental health again. Somewhat surprisingly, LeeAnne turned out to be a great listening ear. She was supportive, compassionate, and empathetic to Stephanie's struggle and the pair have been on strong footing ever since.

As for Brandi, while she's not actively standing in the way of LeeAnne and Stephanie becoming friends, she confessed that it's challenging on a recent episode of Watch What Happens Live. She explained:

I think that Stephanie and LeeAnne both can be friends with whomever they would like, but I think it's a little awkward seeing that they've been friends for just a couple weeks and then they're now going wedding dress shopping.

But regardless of either woman's relationship with Brandi, it looks like, at the least, they've got each other to lean on.