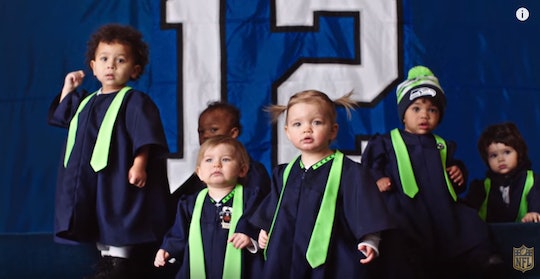 Are Super Bowl Babies Really A Thing? This Ad Shows Why It Would Be Cute & Creepy — VIDEO

Certain trends are pretty normal when it comes to childbirth. It’s no secret that we typically see an uptick of babies born nine months after snowstorms, power outages, and holidays. But are Super Bowl babies really a thing? According to the National Football League, the answer is yes. In a press release to launch the latest in its “Football is Family” marketing campaign, the NFL claimed that winning cities often see a boost in birth rates exactly nine months after the big game.

That idea is the premise behind what might be the cutest, if not the strangest, commercial so far in the Super Bowl season. The “Super Bowl Babies Choir” features people conceived after their parents’ favorite team won the Super Bowl — from babies just a year old to 49-year-old adults born nine months after the very first Super Bowl. The clip also includes glimpses into the past wins that might have fueled all that love. CNN reported a brief statement from the NFL saying that the commercials are meant to “recreate one of the greatest love songs of all time to celebrate the greatest game of all time.”

Well, the commercial certainly had fans excited for the 50th Super Bowl happening on Sunday between the Carolina Panthers and the Denver Broncos. For starters, the ad led some fans to wonder if they were born out of their parents’ (ahem) enthusiasm for their home team’s win.

For others, the Super Bowl babies only mocked their own slim chances for a home team win — or a family, apparently.

I’ll be totally honest and admit that I can’t decide if this commercial is incredibly creepy or pretty cute. The kids and grown-up Super Bowl babies are all adorable in their choir robes and team colors, so I blame my confusion on the song lyrics. Set to the music from Grammy winning recording artist Seal’s international hit “Kiss from a Rose,” the Super Bowl babies sing about the night each of their parents had their own (hopefully private) Super Bowl parties:

We’re all babies! / It all happened on the night that a Super Bowl was played / Ooh, that is why we’re here singing this sweet serenade

And now Super Bowl 50 is here / So much reason for cheer / Tonight.

And those lyrics are only from the first 40 seconds of the commercial. The entire, albeit cringeworthy, three-minute video is available below and online at the NFL’s YouTube channel.

We’ll have to wait until at least Oct. 30 to see if the NFL is right on this one. That’s the estimated due date for a baby conceived on Feb. 7, according to Perinatology.com. Mark your calendars, football fans!