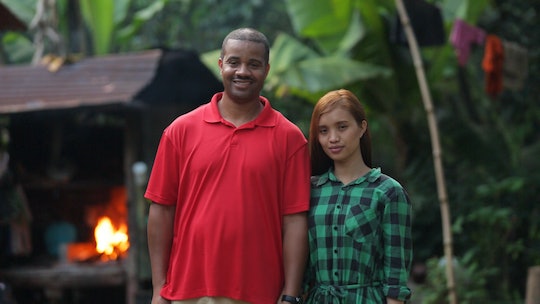 Tarik Was Ready To Propose To Hazel On '90 Day Fiance'

The second season of 90 Day Fiancé: Before the 90 Days continued to follow some couples from Season 1, but it also introduced several new pairs who were trying to tie the knot. That included 43-year-old Tarik Myers, a single father from Virginia Beach who had fallen for 25-year-old Hazel in a matter of weeks. But are Tarik and Hazel from 90 Day Fiancé still together? Tarik and his brother went to the Philippines to meet her, but it's too early in the season to know how it all turns out.

Unfortunately, even though filming has presumably finished at this point, there's no information to glean from social media either. If Hazel has any accounts (Twitter, Instagram, or something else) then they're not that easy to find. Tarik has a public Instagram, but there aren't many direct references to Hazel on it. There was a photo of Tarik in the Philippines with a group of children, as well as a screenshot from the show of a woman that he captioned, "Damn. I'll be watching this Sunday to see who THIS woman is..." He punctuated the statement with a thoughtful emoji stroking its chin. He may have been hinting at an upcoming twist, but he didn't elaborate.

It looks like to get to the bottom of what's going on with Tarik and Hazel, fans will have to keep watching. 90 Day Fiancé: Before the 90 Days airs every Sunday on TLC.

Even though information is scarce about the status of Tarik and Hazel's relationship, the very few clues that are out there aren't particularly optimistic. Reality Blurb reported that Hazel did have a personal Instagram account, but it was private and she didn't follow Tarik on it; he didn't follow her either. Though they were Facebook friends, their interactions were limited until the show started airing. Even then, there weren't any comments between them. Hazel just liked one of Tarik's photos.

Of course, this might not mean anything. Just because they're not gushing over each other on social media doesn't mean they're not in contact. They could simply prefer to text or call one another. Perhaps they have other private accounts that they use to communicate. And they might have kept quiet in the months leading up to the premiere of Season 2 because they didn't want to give away any spoilers; a show is always more exciting when you don't know exactly how it ends, after all.

Promotional material for 90 Day Fiancé did seem to imply that Tarik and Hazel would have a complicated courtship. In his introduction, Tarik explained that he told Hazel he loved her before they ever had a face to face meeting. He described her as the "yin to my yang" and praised her looks. Before boarding the plane to the Philippines to meet her, Tarik seemed totally certain of their relationship, so much so that he bought an engagement ring. Tarik was convinced that she was the one.

His brother was less convinced, and there is a chance that those concerns weren't wholly unfounded. Tarik hadn't known Hazel for very long before jumping into settling down, and in the long run that might have had an effect on their relationship. But based on the available information, it's just too difficult to say for sure how what the conclusion will be. Hazel and Tarik might deal with some rough patches but find a way to overcome them. They might decide to call it quits after they finally spend some one-on-one time together. Right now, it could go either way.

Until 90 Day Fiancé reaches its resolution, viewers can only speculate about what happens between Tarik and Hazel.