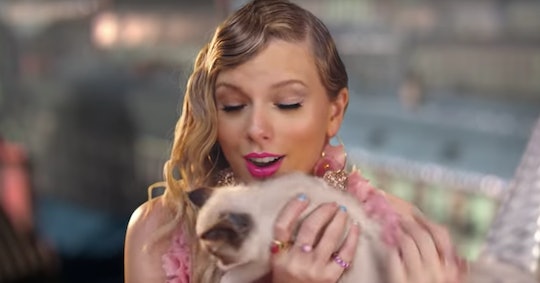 Taylor Swift May Be Addressing Engagement Rumors In Her New Music Video "ME!"

The internet can't get enough of "ME!," the new single Taylor Swift dropped at midnight on Friday. The 29-year-old singer released the song along with its accompanying music video, which appears to be jam-packed with Easter eggs about her personal life. And the video, and the clues planted within, may have fans no longer wondering whether Taylor Swift is engaged to her boyfriend Joe Alwyn.

There are no shortage of hints throughout the "ME!" video, including a Christmas tree as a possible homage to Swift's childhood home on a Christmas tree farm in Pennsylvania, a disappearing snake in reference to her old persona being gone, and seven suitcases as a nod to this being her seventh album, according to Vulture.

There's one Easter egg that stands out above the rest, however. As Glamour noted, in one portion of the "ME!" video, viewers are treated to a glimpse at a "dreamlike, hybrid city of London and the United States." The made up location appears to be a nod to Swift and British boyfriend Alwyn bringing their lives together in the near future.

In the music video, Swift appears to shut down engagement rumors by rejecting an engagement ring from collaborator Brandon Urie's character, and accepting a kitten instead.

Rumors have been swirling about Swift and Alwyn getting engaged for some time now, despite their relationship being relatively fresh. In March, Us Weekly reported that a proposal was looming with a source reportedly saying the actor "wants to marry her and she wants to marry him," but was waiting for the right moment to get down on one knee.

Swift and Alwyn, however, have been very private about their relationship, and likely will continue to be as it progresses.

The couple has been quietly dating since 2016, according to AOL.com, and they went public about their romance in May 2017. Alwyn first spoke publicly about his relationship with Swift in September 2018, telling British Vogue he was "aware people want to know about" their relationship, but noted that they were keeping things "private" and fans had begun to accept that. "I'm aware people want to know about that side of things," Alwyn previously told British Vogue. "I think we have been successfully very private and that has now sunk in for people... but I really prefer to talk about work."

Alwyn also spoke on their extremely private relationship in a January interview with Mr. Porter. He explained that, to him, privacy when it comes to romance is normal. "I don't think anyone you meet on the streets would just spill their guts out to you, therefore why should I?" Alwyn told Mr. Porter. "And then that is defined as being 'strangely private'. Fine. But I don't think it is. I think it's normal."

With all that said, it doesn't seem that Swift and her beau will be offering up any more insights into their romance. In the meantime, though, fans will have to keep digging for ~*clues*~ in her music videos and cryptic social media posts.