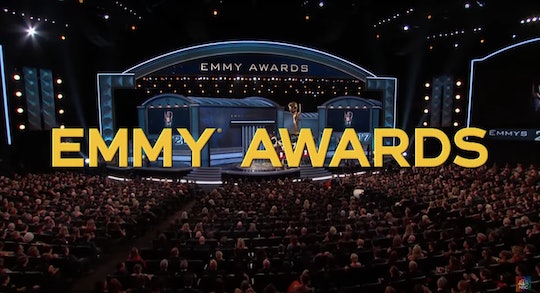 The 2018 Emmys are swiftly approaching! As fans prepare to root for their favorite shows and stars, many find themselves wondering: are the 2018 Emmys live? Don't worry about pre-recorded segments spoiling the fun. The majority of the Emmys are absolutely live and will be available for streaming.

It is a big year for the Emmys with 2018 marking the 70th Emmy Awards. The awards will take place on Sept. 17 at the Microsoft Theater in Los Angeles, CA, as reported by CNET. There's always some confusion around whether or not the Emmy Awards are actually aired live, but some may be getting things confused with the Creative Arts Emmys.

Before the Emmy Awards on Sept. 17, the Creative Arts Emmys airs in order to honor actors, cinematographers, musicians, and other technical specialists. The awards are announced over a two day period, Sept. 8 and 9 for 2018.

The Creative Arts Emmys will then air at 8:00 p.m. PT on FXX on Sept. 15, only two nights before the Emmy Awards. This, however, doesn't mean that other shows are pre-recorded.

The 70th Emmy Awards, as reported by CNET, will air live. And for anyone worrying about how to watch, there's plenty of ways that people can tune in.

This year, the Emmy Awards will be hosted by SNL’s Michael Che and Colin Jost as shown in the promo linked above.

NBC is broadcasting the 70th Emmy Awards, as reported by Deadline. This means live stream will be available. In order to access live streams, NBC's Live Stream FAQ outlined, "Go to NBC.com to watch the Live Stream on the web, or download the free NBC App to watch using your mobile or connected TV device."

However, the NBC Live Stream is not available in all areas. If you're outside of the United States, you'll likely be unable to tune into NBC's live stream. Even for this within the United States, it's important to check with your service provider beforehand, as NBC outlined in their FAQ:

For those hoping to catch the red carpet, simply bookmark the E! Red Carpet and start hitting up the site around 3:00 p.m PT on Sept. 17 to catch the celebrity arrivals.

In addition, E! has their own YouTube channel specifically for red carpets and live events.

"Join E! Live from the Red Carpet at the Oscars, the Grammys, the Golden Globes, and more," the account's "About" page stated.

This is about to be a big year for the Emmy Awards. In terms of nominations, Netflix is running in the lead of most nominated network, topping HBO with 112 nominations this year, as reported by Wired. And the always brilliant Sandra Oh has made history as the first Asian woman to win a Best Actress nomination for her work on Killing Eve. This means, if Sandra Oh wins in her category, it will be a historical night.

If you're unable to catch a live stream for whatever reason, you'll definitely still be able to catch the show a day later. Just make sure to avoid social media as much as possible if you don't want any spoilers.