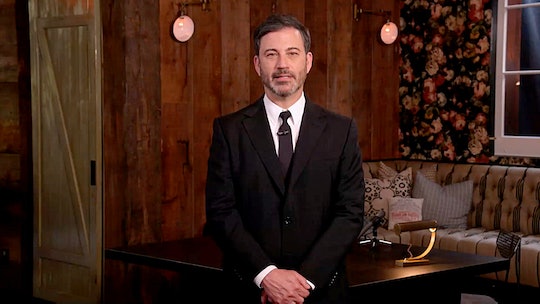 The biggest night in television is nearly here. But due to social distancing guidelines and health precautions, the 74th Emmy Awards will be virtual, meaning there will be no live audience or red carpet. With that said, are the 2020 Emmys going to be live?

Yes, the Emmys will be airing live on ABC this Sunday, Sept. 20, at 8 p.m. EST. But the broadcast will be virtual, so nominees won't be gathering together in sparkly dresses and tuxes for the sake of social distancing. Instead, celebs will be accepting awards from their own homes, according to Variety, with host Jimmy Kimmel presenting from the Staples Center in Los Angeles without an audience.

There will be some pre-taped segments during the primetime awards show, according to Deadline, but 90% of the show will be live, which of course means there's potential for things wrong or differently than planned. Especially since celebrities will be appearing from 130 different feeds from multiple locations around the world, according to Deadline.

During a virtual press conference on Zoom on Wednesday, the show's producers Reginald Hudlin and Ian Stewart told Entertainment Tonight that something unexpected is bound to happen at some point in the night. "I think, in a way, things are going to go wrong," Stewart told the news outlet. "It's never been done before... So things aren't going to work perfectly all the time and I think that's part of the endearment of it all. We're going to try our best and the good thing about that is we got Jimmy Kimmel, who loves live TV and loves chaos. I think he's actually hoping things go wrong to tell you the truth."

Kimmel told Deadline that he has no idea what to expect on Sunday night either, especially from the winners. "My hope is that they are surrounded by their families so that we have genuine emotion and excitement when they win, and that's what I'm hoping, because we're certainly not going to have that in the empty Staples Center," he said. "I don't know, maybe I'm going to screw it up. You know, the thing about it is you only get one shot at it."

Since there will not be a red carpet at the Emmys this year, there is no telling what nominees will show up wearing. The show's producers have said that the dress code for Sunday is "come as you are but make an effort" — so guests could possibly show up in their fanciest formal wear, or their finest pajamas.

As we've been saying for months now, we're living in unprecedented times, so the 2020 Emmys are just part of that.