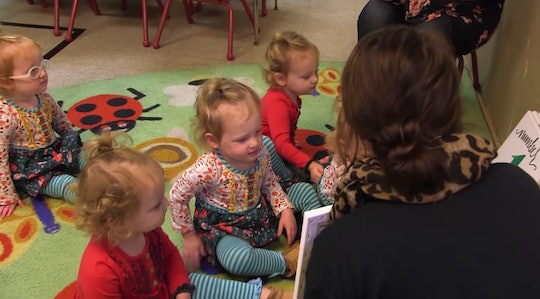 The Busby Quints Are Growing Up So Fast, But Have They Started School Yet?

In April 2015, Danielle Busby made history when she gave birth to the first all-female set of quintuplets in the United States. Danielle and her husband Adam have kept the country up-to-date on Ava Lane, Hazel Grace, Olivia Marie, Parker Kate, and Riley Paige's hectic lives since then via the family's TLC show OutDaughtered and their blog It's A Buzz World. But now that they are all 3 years old and growing up fast, fans may be wondering if the Busby quints are in school yet?

OutDaughtered, which is currently in Season 3, first broached the topic of the quints attending school back in Season 2. In Season 2, Episode 5, which aired in December 2016, Danielle and Adam began to research preschool options for the quints, according to TLC's website. However, the topic caused a riff in Danielle and Adam's relationship, according to TLC, because Hazel was the only quint who was not yet able to walk, meaning she was not ready to join her sisters at preschool.

In the following episode, Episode 6, the couple hired an occupational therapist, Amy, to evaluate and assist Hazel in her development, as seen in a YouTube clip from the episode. After doing some exercises with Hazel, Amy estimated that she would be walking within a few months, meaning she could start preschool at that point.

When Danielle filled Adam in on Amy's evaluation, he was very distressed. "It's just the fact that all of them are going to school, and they're experiencing all this new stuff, and we're seeing the other babies kind of develop ever since they've gone to school," he told Danielle. "And Hazel's missing out."

Danielle reminded him that just because they are quintuplets, that doesn't mean that they have to do everything together. "You have to let yourself be comfortable — we have so many kids that are gonna all grow so differently, so you have to come to [accept] that they're not all the same," she told her husband. "Every doctor, everybody tells us, individual, individual, individual. And that's the hardest part about having multiples, probably, is not to compare," she added, to the cameras.

By Episode 7, which chronicled the quints trick-or-treating for the first time, Hazel was seen walking around with her quint sisters. At this point, they were all about a year and a half old. And later in the season, TLC UK shared a video documenting Hazel's "journey to her first steps." Cameras captured Hazel walking 20 steps for the first time — and her parents were so excited. "Now we'll have five of them going to nursery school, and she's not gonna have to miss out on all that stuff," Adam said.

And now, based on clips available from this current season, it looks like the girls are all attending preschool together — rather, they were. In a trailer for Season 3, which premiered on July 10, the owner of the quints' preschool tells Adam and Danielle: "Riley and Parker, they're ready to move up." In the next shots, one of the quints is seen hysterically crying in the preschool, seemingly about having to leave her other sisters (though that may just be creative editing...). Danielle and Adam seemed nervous about the transition — Adam even revealed in the clip that the last time any of the quints were split up was when they were placed in separate incubators in the The Neonatal Intensive Care Unit.

Not to mention, the trailer also shows the quints running around a dojo in karate uniforms, in angel costumes for what looks like a church Christmas play, and strutting down the runway at a fashion show with their big sister Blayke, who is 7 — so they're definitely keeping very busy.

And in a clip from this season, it's revealed that Danielle and Adam decided to let Riley and Parker move up to the next class level.

But if you want to know how the gals responded to being split up, you'll have to tune into this season of OutDaughtered!