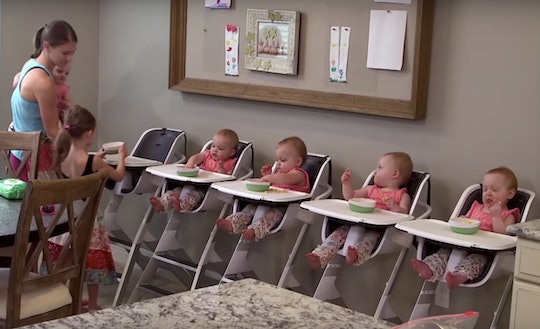 Everything We Know About The Conception Of The Busby Quintuplets

When you think about big families — and we mean, Busby and Duggar big — the next question that often comes to mind is how it is logistically possible. After all, a single pregnancy is taxing on the human body, so to imagine doing it so many times over is mind-boggling. When it comes to large sets of multiples, the chances that they were conceived naturally are usually slim. That means many probably wonder: Are the Busby quints IVF? This is how Outdaughtered stars Adam and Danielle ended up with all those beautiful babies.

For the record, it's absolutely nobody's business how one does or doesn't conceive a child. Building a family is not always a straightforward ordeal, and whether you adopt, foster, conceive naturally, or utilize fertility treatments is completely your own decision, and not one that anyone else needs to be aware of. However, the Busbys have been open about their fertility journey, including what led Danielle to being pregnant with 5 little girls at once. To make a long story short: No, the quints were not conceived through IVF, but after the couple struggled to conceive after having their first daughter a few years prior, they did continue to use the fertility drugs that helped them get pregnant the first time.

In a blog post, Danielle opened up about the fact that she did not ovulate regularly, and her husband's testosterone, sperm count, and motility were low, meaning that they were struggling to conceive, In Touch Weekly reported.

“We went through five cycles (five months) with me being on Clomid and doing IUI… and no success. I was also creating and ovulating three-four eggs each cycle, so you would have thought ONE egg would have made a match. My doctor did warn us it usually takes three cycles to receive a positive," she continued. After no success, their doctor suggested IVF, but the couple felt it was too "stressful, time-consuming and expensive," so they opted out.

Then Danielle decided she wanted to try one more time while still using the fertility drugs, and she got pregnant with her oldest daughter. When they went to have another, they tried a similar formula, but this time around, five babies were conceived.

To be clear, IVF, or In Vitro Fertilization, is a process during which eggs are retrieved from the ovaries, fertilized by sperm in a lab, and then implanted into the uterus, Mayo Clinic reported. This is different than other fertility drugs, which might stimulate the production of certain hormones that bolster eggs or sperm.

Though the story ultimately had a happy (albeit surprising) ending for the Busby family, Danielle has shared that the years they were infertile were some of the most emotionally challenging of her life.

"Infertility struggles was one of the hardest phases of my life," she told CountryLiving.com. "We will never understand why we may struggle through parts of our life, but I do believe there is always good that will come from a struggle. We just have to push our pride aside and not control the uncontrollable things."

So, there you have it: after a stretch of struggling with infertility, all six Busby daughters were conceived with the help of fertility drugs, but not IVF. It just drives home the evergreen point that getting pregnant is a journey that is unique to everyone, and however we arrive at parenthood is the right way for us to go.