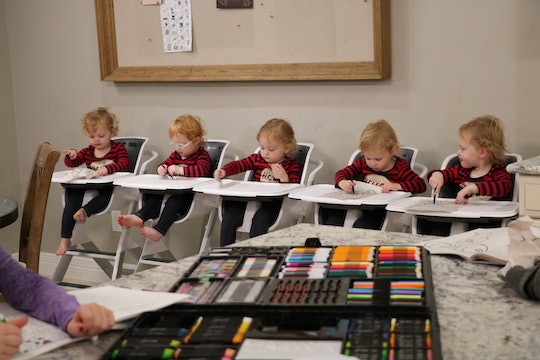 The Busby Quints Say Goodbye To Diapers On ‘OutDaughtered’

Danielle and Adam Busby have occasionally disagreed about when to take the next step with their quintuplets on OutDaughtered. When crib escapes lead Adam to push for big girl beds, Danielle resisted; now that the quints might be ready for big girl panties, Adam is resisting. It all depends on how well their potty training is going. But are the Busby quints potty trained? They've been working on it, and this exclusive OutDaughtered clip indicates that Danielle believes it's time to leave diapers behind.

The clip doesn't reveal why Adam isn't on board with the plan; OutDaughtered airs Tuesdays on TLC, and the full episode will have the whole story. Instead, the clip follows Danielle and her sister Crystal while they go shopping with the quints. With all five girls in tow, they go somewhere called the Funky Monkey that seems to have it all, with shelves stocking everything from dishware to packages of toddler undies. "I know Adam is hesitant, but I'm wasting no time with this potty training," Danielle says in a confessional.

Danielle explains to the retail worker that the quints' school recommended having three to five pairs of underwear for each of the girls. Both the saleswoman and Danielle think that's a lot of underwear, since it would come around to around 25 pairs total, but it's a small price to pay to be free of diapers.

"On one hand, like, no more diapers — what a huge pay raise that's gonna be," Danielle continues in the confessional. "But we're talking like 20, 25 pairs of underwear to bring to school. Hello, washing machine!"

Once the decision is made to make the purchase, packages are picked out for each of the girls. They're very curious about the designs on their new items of clothing — so much so that they just have to tear open the plastic and get a closer look. Danielle and Crystal ask them about the patterns on the undies, which the quints are only too happy to talk about. Lulu shares that hers have happy faces on them, while Riley has unicorns (or, to be exact, "a rainbow horse"). Another of the quints prefers puppies, while Ava is just thrilled that hers are blue. When Danielle remarks that they're very cute, Ava confirms with a swift yes.

Riley isn't willing to wait to give her new undies a try. While still standing in the middle of the store with her sisters, she pulls her underwear on over her heart-patterned leggings, then follows with two or three more pairs for good measure. Hey, once winter hits, you have to layer up for warmth, right?

Danielle compliments Riley on a job well done, then says in the confessional, "Riley's jumping right into the deep end on this one. I mean, she's ready to wear big girl underwear and I think it's a good sign." Riley's impromptu fashion show starts a fad and soon the rest of the quints are following suit to the best of their ability. Hazel has a little bit of trouble figuring it out (it is her first try, after all) and sticks both her legs in one leg hole so the undies are around her waist like a belt. Practice makes perfect.

Danielle and Crystal offer some last minute advice — panties are not like diapers and must be kept dry — before everyone gathers the scattered undies in their arms to head for the register. "I know Adam's not totally on board and I'm sure there'll be an accident eventually, but it's all part of the learning curve," Danielle says. "I think they'll do great."

Danielle embraced all the challenges inherent in this new endeavor and hopefully when the full episode airs, Adam will too.