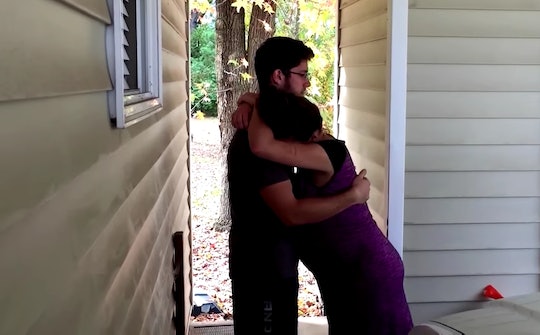 Are The Duggar Men Present For Births? They Offer Moral Support For Their Wives

Most people are probably familiar with the Duggars — that super-sized, ultra-conservative family from Arkansas who has their own reality TV series. Aside from their shunning birth control, Michelle and Jim Bob Duggar have made a name for themselves and their 19 children showing the world how they've chosen to raise them under their extremely conservative Christian faith. Their family's many controversial rules include modest dress, courtships, little physical contact with the opposite sex before marriage, strict gender roles, and homeschooling. As more of the adult Duggar children are starting families of their own, many people might wonder: Are the Duggar men present for births? They definitely provide emotional support for their laboring wives.

Even back during the Raising 16 Kids days, Jim Bob was right there providing emotional support for his laboring wife — as she prepared to give birth to baby number 16, Johannah. Jim Bob even cut the umbilical cord after his daughter was born. This same level of involvement has played out through all of the adult Duggar children's births, as well. Josh Duggar was there with his wife, Anna, during all five of her home births — and the first and second deliveries were even documented on 19 Kids & Counting.

As documented on Counting On, Derick Dillard helped coach his wife, Jill, through contractions at home. Judging by a 2015 blog post, it's clear that Derick was very involved — and informed — during all stages of labor. "My wife, Jill, is beginning to have contractions which means that the birth of our son is near," he wrote in a blog post, ET Online reported. "From what I've learned in birth class (as well as from Jill, who is a student midwife) and from what I am witnessing right now with Jill, labor pains start sporadically and then become more consistent, longer lasting, and stronger the closer we get to the birth of our son."

On April 6, 2015, Jill and Derick welcomed a baby boy named Israel. Although they had hoped for a home birth, Israel was born via emergency c-section at a hospital after more than 70 hours of labor, Us Weekly reported. Their second son, Samuel, was also delivered by c-section following 40 hours of labor, People reported. And you can bet Derick was there by his wife's side for both births.

Ben Seewald and Jessa were no different, as far as Ben's involvement during labor and delivery was concerned. "Ben has been right there beside her, cheering her on the whole time," Jessa's older sister, Jana, said in a birth special episode of Counting On.

"Ben was just solid," Michelle said, during the same episode. "He was there and he stuck by her side. And it was just really sweet."

Ben himself also spoke about what it was like witnessing his wife experiencing contractions. "As labor was ramping up, she was in pain, and so I was feeling the pain, too. It was pretty difficult," he said at the time. "I was thinking to myself, 'Hopefully the baby comes soon, so this will be over. But it just kept dragging on and dragging on." Eventually though, baby Spurgeon Seewald was delivered at home on Nov. 5, 2015, ET Online reported. However, because of excessive bleeding, Jessa was rushed to the hospital shortly after the delivery, the Daily Mail reported — where she ultimately needed a blood transfusion. And you can bet Ben was right there with Jessa for the birth of their second child, Henry, in 2016.

Earlier this year, the birth of Joy-Anna and Austin Forsyth's first child was also featured on Counting On. Joy labored at home with a midwife team for 20 hours before she was transferred to a hospital for an emergency c-section, People reported. The reason? Her baby was in a breach position. Little Gideon was safely delivered on Feb. 23 — with his proud father, Austin, right there in the operating room.

Joseph and Kendra Duggar welcomed their first child — a son they named Garrett — on June 8, People reported. Although no details about the labor and delivery (aside from the baby's name and stats) have yet been shared, I have a feeling we'll be seeing Joseph actively supporting his wife in an upcoming Counting On special. The next Duggar due to give birth is Jinger Vuolo, who is expecting her first child (a girl!) with husband, Jeremy, in July, People reported. And I'd bet anything that Jeremy will be nearby supporting Jinger throughout the process, as well.

So there you have it. The Duggar men have a strong history of being active supporters during labor and delivery. They obviously take their roles as fathers very seriously — and I'm sure their wives appreciate knowing they have sometime to lean on during one of the most physically trying times in their lives.