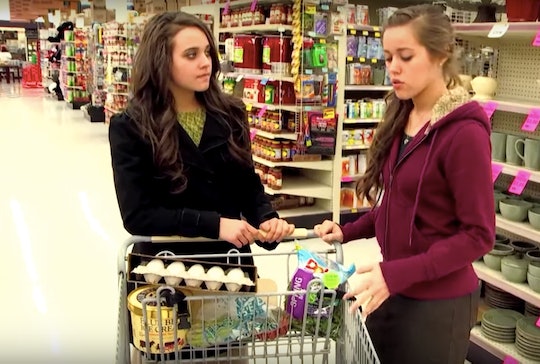 Here's How The Duggars Manage To Stay Totally Debt Free

One might think that, with 21 mouths to feed and 20 acres worth of property to maintain, The Duggar family would find themselves in quite a lot of debt. But... are the Duggars debt free? Apparently, they are. In fact, the 19 Kids and Counting family has their own now well-known (at least among fans) mantra: "Buy used, save the difference." Michelle and Jim Bob Duggar have only repeated it approximately one million times on television. And while they probably don't have to worry too much about money-wise given their successful family real estate business, plus their TLC series, it's still shocking that a family of that size could live devoid of debt.

But, then again, it's not so shocking when you look at how exactly they live. The Duggars are always going to thrift stores, garage sales, and discount grocery stores. They are always doing DIY projects (they even have their own recipe for DIY laundry soap to cut laundry costs, according to Business Insider!) and they cut their own hair. They buy what they can in bulk and they pass their clothes down to their younger siblings. Cable is a non-thing in their house; their fun comes from the trampoline (fair, those are very fun), the indoor playscape (OK, that sounds awesome), the pool table (sure, why not), the education software games (could be worse), and the pianos and violins that each kid learns to play (impressive), Business Insider reported.

I'm an avid thrift store shopper, and I love a good garage sale — heck, sometimes I even cut my own hair (which I almost always later regret). But some of The Duggar's cost-cutting strategies are about as far out as their stances on women's rights...

Let's take a deeper dive. Michelle and Jim Bob fielded questions about living debt-free in an interview with TODAY back in 2008, when they spilled some of their secrets to saving.

"[How have you] made ends meet (feeding, clothing, diapering, entertaining, etc.) while still being debt-free? Also, how do [you] pay for everything without credit, and still have money in the bank every month?" one curious fan asked.

Jim Bob's response? He retorted with another question, of course. "How do [other] people pay interest for the debt on top of making ends meet? What we've done is something that a lot of people don’t want to do," he said, according to TODAY. He added that they've always driven older vehicles instead of purchasing new cars. Michelle (at least back in 2008) would go to garage sales, where she'd buy shoes for a dollar. And, while they'd always spent a lot of money on food and diapers and the like ($3,000 a month), they probably spend less on clothing than a family of four does, he said.

They also lived in a 900-square-foot house for seven years to save in rent money and be able to pay cash for their second home. Plus, before they started reeling in royalties from their hit TV series, Jim Bob bought several commercial real estate properties that became their main income source. Essentially, he turned a 37,000-square-foot chicken hatchery into 10 rental units and rented out a cell phone tower to mobile phone carriers, according to Business Insider. Neither were a bad idea on his part.

"We went to a financial freedom seminar when we were young," Michelle added to the couple's response, according to TODAY. "It was about getting out and staying out of debt."

They give a lot of credit to the 16-hour financial freedom seminar by Jim Sammons for their financial success, according to Business Insider. And it seems like they've had years since that seminar of being mindful with their money.

In 2010, Michelle told TLC that a huge key in being able to live a debt-free life is having the right mindset.

"I'm not going to go out and buy everything brand new, but I really can shop around whether it be through the newspapers, Craigslist, or going to thrift shops or pawnshops or whatever," she explained, admitting that they would not be able to live debt-free if they were going out and buying everything new, according to TLC.