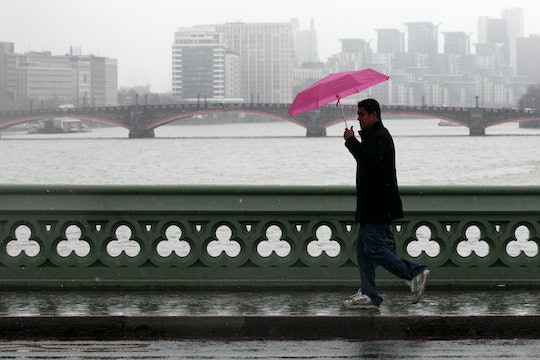 Are The London Bridge Incident & The Borough Market Incident Related?

News broke on Saturday that the London Bridge experienced an incident that has many on high alert. According to the BBC, police responded to calls that a van veered off and hit pedestrians on the bridge, to be followed with reports that a second incident was taking place at a nearby market. It may lead some to wonder if the London Bridge incident is related to the Borough Market incident, and while reports by officials have not been released, looking at proximity of the two will certainly be important to the investigation.

EARLIER: According to the Independent, news first broke about a truck veering into pedestrians walking at the London Bridge. In addition to the truck incident, reported stabbings were also taking place, which The Guardian reports. One eyewitness told The Guardian, that people came running into a nearby pub telling patrons to run because "people [were] stabbing each other."

Shortly after responding to the bridge incident, the Metropolitan Police notified people on Twitter that they were also responding to a second call about reports of stabbings at Borough Market. The proximity of the two locations is certainly something that may leave some wondering if the two are related. Twitter user, and Deputy News Director at Buzzfeed News tweeted the following map to show the relatively close distance between the bridge and the market.

The Metropolitan Police have asked those in surrounding areas to seek shelter and get as far away from the two close proximity incidents as possible.

Officials have not released a statement on if the two are related, but due to the close proximity in time and distance when reports came in, there is no doubt that some may be wondering if they are related.

Prime Minister Theresa May, and President Donald Trump, have both been briefed on the incidents. News that May will chair a meeting of the government emergency response shortly was reported following the response by officials to the incidents. Donald Trump tweeted a rather tone deaf tweet, potentially as a response to the London attack.

Without mentioning the incidents, Trump managed to push his agenda to ban Muslim-majorty countries from entering the United States. Donald Trump's tweet is the absolute wrong response to the incidents, leaning into fear and hate more than help and love. Minutes later, Trump responded with the following tweet, which is usually more customary for leaders to present to the public following an attack.

As officials are able to assess and respond to the situation, more news will eventually unfold revolving around if the two incidents were related, hopefully allowing officials to gain control in the situation.