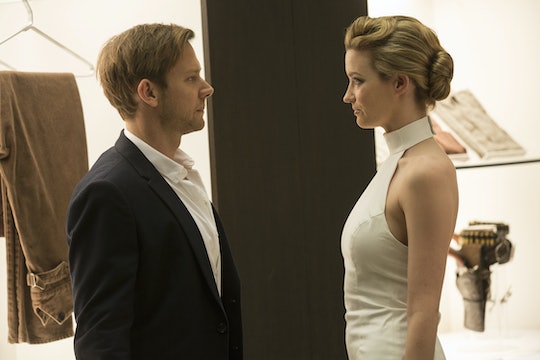 Are The Man In Black & William The Same Person? This 'Westworld' Theory Could Make Sense

In its second episode, HBO's Westworld explored the park from the point of view of a guest, following new arrival William as he shed his real life and stepped into Westworld's immersive experience. Part of the park's appeal is that guests can be whoever they want once they're inside; it's ultimate wish fulfillment with zero consequences. Much of William's story focused on who he would choose to be in the park. Would he be a good guy or a bad one? William's choice seemed to contrast against recurring antagonist the Man in Black, who decided long ago to play the villain. But is there a deeper connection between the characters? One fan theory speculates that there is, putting forth a fascinating hypothesis: are the Man in Black and William the same person?

They don't seem similar at all on the surface. In one moment heavy with significance, William was made to choose whether he wanted to wear a white hat or a black one – whether he was going to be a hero or a villain. William chose white and then spent his time in the park resisting all the darker temptations on offer. William and the Man in Black are presented as opposites, signified by their color choice, but perhaps there's more to it than that. Maybe William is the beginning of the journey and the Man in Black is the end.

For this to be true, the timeline of the episode would be called into question. Though it seems as if all the action is happening concurrently, there is reason to believe William's storyline is taking place in the past while the Man in Black's takes place in the present. The looping narratives of the park make any differences stand out, and William's entry into Westworld wasn't consistent with what was shown in the premiere. The differences were minor: instead of the Sheriff offering an adventures there were army recruiters, and familiar characters like Teddy and Maeve were missing entirely. The Westworld logo was also slightly different in William's storyline, perhaps because it's an older variation. Some fans even pointed out that the train station William initially arrived at bears some resemblance to the old, disused part of the park visited in the first episode.

Another telling detail is that the only host William shows real interest in is Dolores. This could be because he's clearly interested in playing hero and Dolores' character is set up as a sweet prairie girl in need of saving. However, the Man in Black is the only other guest to have shown a specific interest in Dolores, though his obsession with her results in cruelty and torment. But these details, along with William's general naivety and passiveness, could make his transformation into a villain an even darker story.

Actor Ed Harris, who plays the Man in Black, did say that his backstory would be explored. "When he first came, he was not the Man in Black. This is a character he has assumed and developed over the many years he's been coming to this place," Harris said during the TCAs. "I think initially when he first arrived, he was exploring what his place was like. I can do whatever I want. I can kill people if I need to or make love to strange robotic prostitutes. I think something happened to him at some point that this part of him that's very dark, very violent, all of a sudden he recognized this was a real part of him he'd never really lived with in his life outside [...]."

This statement does seem to echo the start of William's journey. He begins, very literally, as the man in the white hat who is learning every little detail of this new place he's in. He watches his friend kill carelessly and go to bed with a bevy of hosts, though William himself refrains. The event that may make William turn from normal man to violent villain hasn't been shown yet, but that doesn't mean it's not on its way.

The theory is a complicated one, but it's certainly plausible.