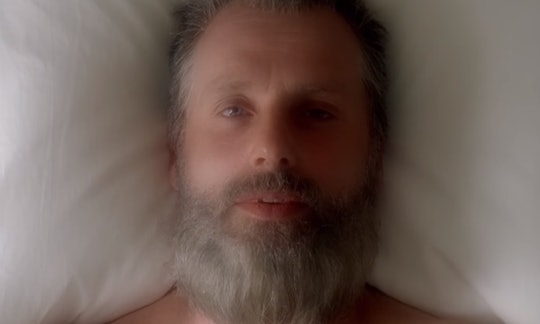 Anyone who watched the trailer for The Walking Dead's eighth season knew that, at some point, they would encounter a seemingly much older Rick waking up at an unknown place, at an unknown time. And while the Season 8 premiere wasted no time in flashing forward to this precise moment, viewers are still left with more questions than answers. For instance, it's even unclear if the "Old Man Rick" scenes on The Walking Dead are real. If anything, they feel more like a hopeful daydream that Rick keeps having, picturing what life could become once the war with Negan and the Saviors is over.

In the early moments of "Mercy," time seemed to be constantly shifting. Scenes would cut from Old Man Rick waking up in bed while some jazzy music played to Rick looking overwhelmed in Alexandria's makeshift graveyard, then over to Rick rallying his group for the war against Negan with another inspirational speech. The connection between the three threads wasn't immediately apparent, either. Was Rick picturing the peaceful future he wanted so badly? Was it an actual flash forward to a time after Negan? Perhaps Rick was just contemplating a new look. Just because it's the apocalypse doesn't mean you can't find time for a makeover!

Once Old Man Rick rose from bed and found his way into the rest of the house, viewers saw that he was living a nearly ideal life. Though he was rocking a Santa beard and had a limp that required the use of a cane, he didn't appear to be bothered by his change of appearance and circumstance. Rick was still dating Michonne, Carl was still living with them, and the little family seemed as happy as they'd ever been. Judith was there too — several years older, but still a little girl. Michonne didn't look different, either, so if the scenes were a glimpse into the future, then not much time must have passed from the current timeline.

However, the hazy way the scenes were shot made them look like a dream sequence straight out of Saved By the Bell. It lent that entire section of the episode an air of unreality that, combined with the fact that they were so disconnected from the rest of the episode, definitely made it all feel like a fantasy. But there is a feasible explanation for Old Man Rick that fans of The Walking Dead comics will be more than familiar with.

In the comics, there was a time jump after Rick's defeat of Negan. The final battle finished with Negan in prison and the good guys triumphant — though Rick's leg was badly broken, which could be why Old Man Rick used a cane. The time jump was only a few years (estimated to be around two, though it could be more), but in the interim Rick did cut his hair short and grow out his beard, just like Old Man Rick. All the details seem to be lining up.

Ultimately, "Mercy" didn't confirm whether the scenes were a flash forward or not, but that's the best bet at the current moment. The show appears to be following the comics fairly closely even though it does take liberties from time to time, so the scenes might be a hint that there is a time jump on the horizon. It may take a few more episodes to see how it all unfolds, but that is the safest prediction to make at the moment.

Then again, the show could decide to surprise its fans by playing into those expectations and then subverting them later on. Right now, Old Man Rick is a mystery that has yet to be officially solved.