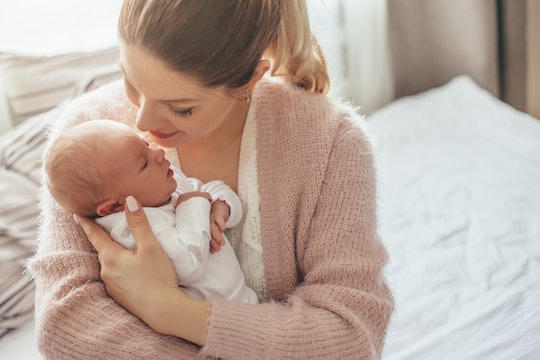 Here's How Accurate The Wonder Weeks Actually Are, According To Experts

If only you could read your baby's mind to know once and for all what the problem is. In the Sandra Boynton book What's Wrong Little Pookie? a mother asks a series of serious and silly questions to find out what's upsetting her child, who finally says "I forget." A baby can't even tell you that much, of course. All you have is acquired knowledge of their different cries to guess whether the culprit is teething, hunger, gas, a wet diaper, fatigue, or a developmental leap. That's why parents want to know, are The Wonder Weeks accurate? This bestselling baby book argues that "sudden age-linked brain changes are a direct causation of the fussy behaviors babies present during age-linked regression periods."

When my daughter was about 4 months old, I signed up for the free Wonder Weeks Leap Alarm, which sends you an email at the beginning of the week your child is predicted (based on your due date, not the baby's actual birthday) to make their next leap. You also get basic information about what this particular mental leap will entail, such as the recognition of familiar events.

I always intended to buy the book at some point, but after purchasing Baby-Led Weaning on a friend's recommendation only to realize the approach it described could be boiled down to a few sentences of common sense, I had baby book fatigue. Anyway, while the emails didn't go into extensive detail, I found The Wonder Weeks predictions to be accurate. This made it easier to deal with my baby's sudden spike in what The Wonder Weeks calls "The Three Cs (crying, clinging, and crankiness)."

Don't just take my word for it — lots of other parents and child development experts agree that The Wonder Weeks, which is based on decades of research by Dutch Psychologists (and husband and wife) Frans X. Plooij and Hetty van de Rijt, is eerily accurate. Mother Kelly Winder called it "pure solid gold" and "the missing piece of the puzzle that you've been searching for" in an article for bellybelly.com.au. Another mom and blogger, Laura Bean, described the positive effect the book had on her in an article for HuffPost:

"Understanding what’s going on really helps me find the patience and grace to just roll with whatever Hudson needs to make him feel safe and secure in what’s probably a really overwhelming time."

Similarly, PopSugar.Moms named The Wonder Weeks as one of its "Off-Registry Baby Gifts Moms-To-Be Don't Know They Need," claiming that it will save your sanity. It also makes the list of The Bump's best parenting books. And parent Lynn Shattuck wrote in Mom.me about how the wonder weeks aren't just for babies — she's continued to find the concept helpful and accurate well into her kids' preschool and elementary years.

Along with parents and bloggers, experts also recommend The Wonder Weeks. According to John Richer, Head of Pediatric Psychology at John Radcliffe Hospital in Oxford, England:

"van de Rijt and Plooij have not only explained the periods of puzzling, difficult behavior in infancy which so worry parents, they have also shown how these behaviors mark developmental leaps and have described the stages in the infant’s understanding. What’s more, van de Rijt and Plooij have described the play and communication that work best with babies at different ages and thus helped parents understand and connect sensitively with their babies. This parent-child connection is the major prerequisite for the development of secure, well-adjusted children."

Let's just say that if I were going to have a third child (hahaha, not happening), I would definitely pick up a copy of The Wonder Weeks this time around. But if you also have parenting book fatigue at the moment, you can sign up for the email alerts or download one of The Wonder Weeks apps. Remember to calculate your baby's expected wonder weeks by due date, not birthday, and find out for yourself just how accurate this scientific explanation for fussiness can be.