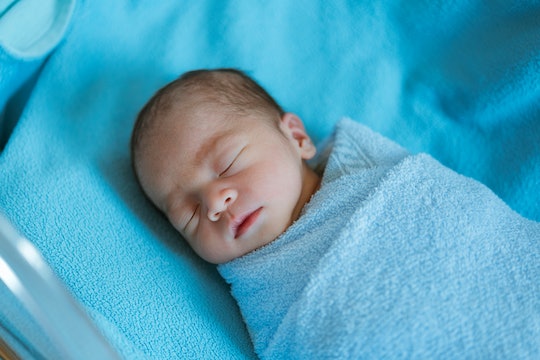 These days, fewer and fewer parents in the U.S. are choosing to circumcise their sons, according to the Centers for Disease Control and Prevention (CDC), and it's no wonder. It's a painful procedure — though doctors once believed that babies couldn't feel pain, they definitely do — and rumor has it that circumcision decreases sexual pleasure for men down the line. In addition, hardline activists called "intactivists," are all over the Internet, their work dedicated to classifying circumcision as damaging, and worse. But are there any benefits of circumcision? You can probably guess the cons, so is it any wonder that to circumcise, or not to circumcise, is a question that weighs heavily on any new parent's mind?

The short answer is yes. In its most recent statement, the American Academy of Pediatrics (AA) determined that the health benefits of circumcision do outweigh the risks, but aren't great enough to recommend universal circumcision for all newborns. That means the decision is ultimately left up to parents, and to individual choice. Most importantly on the benefit side, the task force behind the statement found "significant reductions in the risk of urinary tract infection in the first year of life, and, subsequently, in the risk of heterosexual acquisition of HIV and the transmission of other sexually transmitted infections." Circumcision may also reduce rates of penile cancer, according to Mayo Clinic, and make the penis easier to clean.

Before we get into the details, you should know that some of the AAP findings are controversial, especially according to vocal activist groups like Intact America, who refute them in strong language. But despite these groups, there is really good evidence, as Slate reported, that circumcision has public health benefits, and reduces rates of sexually transmitted infections like HIV, herpes, and syphilis. (As Slate's Troy Patterson noted, though, these studies were mostly limited to African countries, and may not apply so well to developed nations like the U.S.) Recent studies have also put to rest the rumor that circumcision markedly decreases sexual pleasure, Slate noted.

While circumcision does protect newborns from urinary tract infections, the protection is only truly significant for the first few months of life, according to the Canadian Paediatric Society (CPS). As for penile cancer, the Mayo Clinic reported that this form of cancer is, in fact, quite rare, so parents should take that into consideration. On the hygiene front, moms and dads are certainly capable of teaching their boys to properly clean their penises — whether it's circumcised or not.

While there are clearly some benefits to circumcision, they're not exactly overwhelming. In fact, it may be that the biggest reason to circumcise is because it fits your religious beliefs, your own personal preferences, or because it's traditional in the U.S. As always with medical decisions, you should weigh the benefits with the risks, and educate yourself on what the procedure is like.

"Circumcision is usually done in the newborn nursery," explains Deena Blumenfeld of Shining Light Prenatal Education in an email interview with Romper. "Parents, most often, cannot be present for the surgery. The baby is put into a circumstraint — a device to restrain them. They are given a topical and then a local anesthetic." Because general anesthesia is dangerous for babies, newborn boys will experience some pain during the procedure, she says. "Once it's over, parents need to deal with wound care, look for signs of infection, scarring, adhesions, issues with urination, etc."

In the end, the decision whether or not to circumcise your newborn is yours alone, and there's no right or wrong choice, says Blumenfeld. Don't hesitate to ask your provider about circumcision if you're on the fence, and your prospective pediatrician, too.

This article was originally published on April 21, 2018