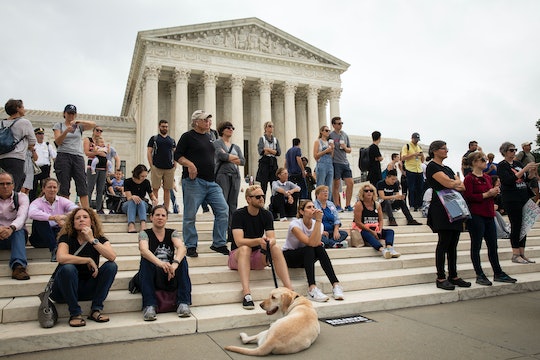 Here's What To Expect When It Comes To Legislation In 2019

With a new Congress and announcements regarding presidential runs right around the corner, the new year looks to be one full of political drama. But in D.C., the devil is always in the details. So you might be wondering, are there any big bills to look out for in 2019?

As Forbes magazine explained, although many might understandably have high hopes for major changes with new players coming to the the capital (Alexandria Ocasio-Cortez comes to my mind), even modest progress in the deadlock between conservative and liberal politicians would be a plus.

As such, there are expected to be proposals on a wide variety of hot button issues, with a focus on seemingly bipartisan problems that would make politicians of all stripes look good back home — things such as infrastructure improvement to repair roads and bridges, criminal justice reform, and addressing the rising cost of prescription premiums, according to Vice.

But as politicians in all parties brace for another election the following year, don't hold your breath on any huge and meaningful bills on such debated-about topics as the environment, education, or gun control actually passing, Vice noted.

For one thing, the differences between the two major parties really are bigger than ever. It's not just your imagination. For another, the Democrats may end up not wanting to let the current Republican party, as led by Donald Trump, have any medium, sort-of victories that Trump can then tweet endlessly about.

Additionally, the current partial government shutdown, tied to Trump's proposal for beefed-up border security, means that the first order of business, bill-wise, will involve opening the government itself for business again, according to ABC News.

With national politics more or less stalled, it might actually be a good idea to turn your attention to the state level. There are some sensible or noteworthy bills in various stages of development to look out for in individual states.

In Florida, SB 66, which is has been referred to committee in the state senate according to the body's official site, is a proposal to label drinking water sources in public schools and install bar codes and filtration systems. Sounds like a good idea, knowing many public schools around the country are housed in old buildings needing repairs to systems including water fountains. Plus, what's in the water could potentially have some real health effects for those drinking out it, namely kids and teachers.

In Texas, as CBS News' Austin affiliate reported, state Rep. Matt Krause, from Fort Worth, filed a bill to keep the rest of the Lone Star state's cities from following Austin's example in trying to require employers to offer paid sick leave. With Austin's new law, which was passed in February, currently being challenged in court, the new bill aims to stop any more towns from doing the same.

Meanwhile, in Washington state, the focus is on gun control. The state's attorney general, Bob Ferguson, is pushing three new bills that will attempt to address the epidemic, according to the website MyNorthwest.com, including a ban on assault rifles, curbing the magazine capacity that Washingtonians can purchase, and a ban on "ghost guns," firearms purchased through the mail, which are difficult, if not impossible, to trace.

And in California, Senate Bill No. 820 takes effect Jan. 1, one of the first pieces of legislation in the era of #metoo, according to the Los Angeles Times. The new law "restricts" how nondisclosure agreements can be used, banning such agreements in cases involving claims of sexual assault, harassment, or discrimination based on sex. The new law applies to both public and private employees.

The Golden State is also leading the way in digital privacy regulation, following the scandals involving Facebook and Cambridge Analytica. The California legislature passed a bill to give residents control over their own data, which goes into effect in 2020, with Wired reporting that tech companies naturally want Congress to pass a more corporate-friendly federal version of the bill, which would then take precedence over California's specific laws.

It's amazing to realize just how hard it is to get anything done in Washington, D.C., let alone in a divided era such as this. And it's doubly frustrating when you see that we seem to have built a system that doesn't always really serve the people who vote to begin with.

But, with at least some of these bills moving the broader conversation forward, maybe in the future the federal government will follow states in being able to implement commonsense reform and do things that are best for everyone.