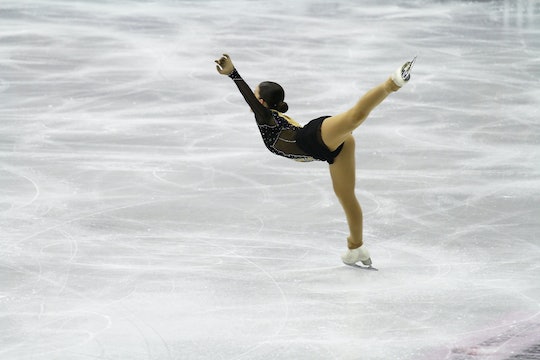 Talk About Badass: These Olympic Athletes Competed While *Pregnant*

Pregnancy means different things for different people. For some of us, it means spending as much time on the couch binge watching bad reality TV and scarfing down burritos as possible (ahem). For others, it means performing record-breaking feats of strength and agility. As the Winter Games in PyeongChang near, some are wondering: are there any pregnant athletes competing in the 2018 Winter Olympics?

Moms-to-be have made it into the games before, after all. And apparently, that shouldn't come as a huge shock — professional athletes are often able to remain on top of their game (or close to it) during pregnancy. World-renowned athlete and alleged superhuman Serena Williams won her 23rd Grand Slam at the Australian Open when she was around 8 weeks pregnant, reported ABC. Cynthia Gyamfi Bannerman, an Associate Professor of Women’s Health in Obstetrics and Gynecology Maternal-Fetal Medicine at the Columbia University Medical Center, told USA Today that she didn't find the win surprising, given Williams' peak physical condition pre-pregnancy.

"This is going to be different for each patient," she said, explaining that women who don't have any underlying health issues can go on to exercise throughout pregnancy (provided that form of exercise is safe). But it's that last part where the Winter Games get tricky: While tennis isn't considered a high risk sport, things like contact sports (ice hockey) and "fall prone" sports (skiing, snowboarding) are generally considered off-limits for pregnant women, according to WebMd. Perhaps that's why there are, in fact, no pregnant athletes competing at the 2018 PyeongChang Games. Or, perhaps we should say: There are no pregnant athletes competing at the 2018 Winter Olympics as far as we know. Most of the women who competed in the Olympics while pregnant were in their first trimester, so it's entirely possible that there are some athletes who are choosing to keep their news under wraps for now.

Another possibility? It's possible that there are pregnant athletes who don't even know they're expecting yet, which was the case for some of the women on the list below. Can you even imagine doing any of these things with the vaguest hint of morning sickness?

Whether they went home with medals or not, every single one of these mamas is a winner.

More Like This
22 Valentine's Day Pregnancy Announcement Ideas Sweeter Than Candy
Fun, Sexy Maternity Lingerie, For When The Mood Strikes
58 Perfect Literary Boys Names
Gaelic Boy Names You Won’t Hear Every Day
What Parents Are Talking About — Delivered Straight To Your Inbox