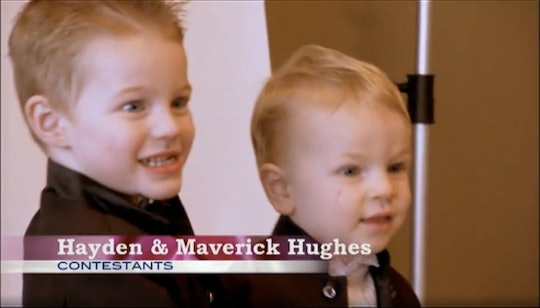 Are There Beauty Pageants For Boys? JonBenet Ramsey May Have Competed Alongside Some

Though child beauty pageants have existed in the United States since the late 1890s, America's fascination with beauty pageants wavers in and out of trend. The show Toddlers and Tiaras (which debuted on TLC in 2009, went off air in 2013, and has returned in 2016) exposed many to previously-unknown child inadequacies: That children should hide missing teeth with "flippers" and wear hair extensions to overcompensate. Others were introduced to the concept of child beauty pageants previously, perhaps in 1996 when the terrifying murder of 6-year-old beauty queen JonBenét Ramsey engendered nationwide scrutiny of child pageant culture. With all of the talk about tastefulness and whether or not it's appropriate to judge young girls on their looks so acutely, you might wonder if boys are subject to similar assessment. So, are there beauty pageants for boys?

According to ABC News, the percentage of boys participating in beauty pageants doubled from 2005 to 2010. Some (but not all) beauty pageants do allow boys to compete. Sporting elaborate costumes and stage make-up, they strut for crowns alongside the girl contestants. Beauty pageants can fall under two different categories: natural pageants and glitz pageants. Glitz pageants encourage the aforementioned flippers and extensions, along with spray tans and teeth whitening. These extreme measures are often required in a much lesser degree for boy competitors; for girls, they're a must. In addition to the traditional pageant garb, a swimsuit competition and "Outfit of Choice" costume are often a big part of Glitz pageants. Natural beauty pageants, on the other hand, discourage make-up and "anything fake," toning down the costumes as well.

The Sunburst Beauty Pageant that JonBenét was a part of in 1996 allows some boys to compete in its current framework, even setting aside special "King" crowns as a counter to the "Queen" ones. Sunburst pageants exist on the local, state, and international levels. Currently, Sunburst only allows boys under 3 years old to compete in its "Baby Model Search Pageant," reserving the "Model Search Contest" for girls and women ages 4 to 27. In the Baby Model Search Pageant, boys and girls compete separately from one another. Boys are asked to wear their "Sunday Best" while girls may wear "holiday dresses, dressy clothes, pageant long or short gowns or flower girl dresses."

However, for his part, JonBenét's father, John Ramsey, has noted his regret in having let his daughter participate in child beauty pageants, saying in an ABC interview, "I now believe with all my heart that it's not a good idea to put your child on public display." Romper reached out to the Ramsey family's representation but did not hear back at the time of publication.