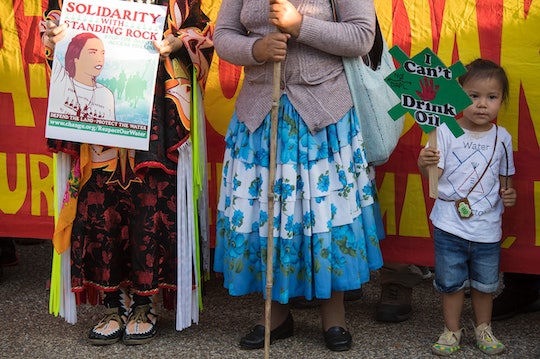 Are There Kids At Standing Rock? Protesters Are Fighting For Their Future

After months of protest in Cannon Ball, North Dakota, the thousands of Native Americans who have stood up against the construction of the Dakota Access Pipeline say that there is no end in sight. Activists argue the pipeline's continued construction threatens not only sacred burial grounds belonging to the Sioux tribe on the Standing Rock reservation, but also their water supply, which could be contaminated as a result of the pipeline. Reports of violent treatment by police against protesters have emerged, but the Standing Rock Sioux have vowed to continue the protest through the winter. Are there kids at Standing Rock? Families have come out to support the protest effort, to help ensure that their children's futures on the reservation are safe.

According to The Independent, an estimated 3,000 Native American protesters have camped at Standing Rock since April to fight construction of the $3.8-billion pipeline by Dallas-based company Energy Transfer Partners. The pipeline is expected to carry 500,000 barrels of crude oil per day from North Dakota to Illinois, leading to major concerns about the potential for groundwater contamination — and those concerns aren't just coming from the Sioux people themselves. According to Inside Climate News, the U.S. Environmental Protection Agency "raised serious environmental and safety objections to the North Dakota section" of the pipeline, and in a letter sent to the U.S. Army Corps of Engineers in March, the EPA's National Environmental Policy Act regional compliance director Philip Strobel wrote that the pipeline has "the potential to affect the primary source of drinking water for much of North Dakota, South Dakota, and Tribal nations."

According to The Hill, President Obama spoke about the Standing Rock protest Tuesday, and said that he believes "there is a way for us to accommodate sacred lands of Native Americans," and that "the Army Corps [of Engineers] is examining whether there are ways to reroute this pipeline." At the same time, Obama indicated that he felt the best course of action was to "let it play out for several more weeks," before determining a resolution, and while that does indicate the potential for progress, it's likely not the news that protesters would like to hear — especially in the wake of what they allege is violence and unfair treatment.

Mekasi Horinek, a Native American activist, told The New York Times that a week ago, he was part of a group of 50 protesters who linked arms and sat together on the Standing Rock Sioux's "sacred ancestral land," which is currently designated as the spot where the pipeline will be built. The problem though, is that the land is actually owned by the pipeline company, and so Horinek and his fellow protesters were arrested for trespassing. Horinek told The New York Times that the group was "zip-tied ... thrown to the ground and pinned," during the arrests. Some of the older protesters — including Horinek's 68-year-old mother, reported being bruised, stiff, and sore "for days."

Horinek also alleges that the arrested protesters had numbers written on their arms, and that they were held "overnight in cages in a parking garage." Horinek bailed himself out the next morning, but said he asked the police officers, "Don't you drink water, too? Don't your children drink water?" As with many of the other protesters, Horinek explained that the issue was far too important to back down from, according to the Times:

But that's not the only report of unfair treatment to come out of Standing Rock. According to The Independent, back in September, tribe spokesperson Steve Sitting Bear said that at least six protesters (including one child) were bitten by guard dogs owned by a private security firm hired to be at the pipeline site. According to The Huffington Post, the Morton County Sheriff’s Department has claimed that the protesters have acted violently, and that some have "set fire to roadblocks" and have thrown "rocks, bottles and homemade gasoline bombs at officers."

Through it all, many families who have vowed to remain at Standing Rock with their children, and in October, tribal officials voted to build a permanent structure to house a make-shift school, in order to address concerns by the state about the “educational well-being of students residing at the Sacred Stone Camp," according to ValueWalk. The Defenders of the Water School is built on a homeschooling model and can accommodate children in kindergarten up to grade eight, according to Fusion. Students there learn all the usual school subjects, but are also taught other subjects, like "Lakota language and songs, drumming, and indigenous history."

As the protests continue, and as support grows for the activists at Standing Rock, it seems more than clear that the sacrifices the protesters are making are absolutely essential to ensure not just the integrity of their land, but their ability to access clean water — something literally necessary for life. With ongoing talk of the possibility that the pipeline could be rerouted, it's hopeful that a satisfactory resolution to the ongoing battle might be on the horizon. But until that happens, it's evident that the Standing Rock Sioux won't be backing down.