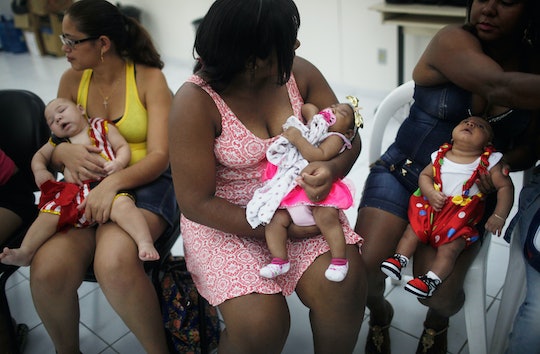 Are There Other Viruses Or Diseases Linked To Microcephaly? Zika Isn't The Only Cause

Brazil has been enduring an outbreak of microcephaly, a birth defect that causes babies to be born with unusually small heads and underdeveloped brains, and can cause seizures, intellectual disabilities, and other complications. Since last fall, there have been more than 4,000 reported cases, and the condition is largely thought to be caused by the simultaneous Zika virus outbreak. But, are there other viruses or diseases that cause microcephaly? According to The Washington Post, there are other causes besides Zika. In fact, when Brazilian health experts investigated 732 of the reported cases, less than half were actually related to Zika (and it turns out that some weren't even microcephaly at all, just slightly small heads).

According to the Centers for Disease Control and Prevention, some cases of microcephaly are genetic, while others are caused by severe malnutrition, exposure to alcohol, drugs, or toxic chemicals, or interruption of the blood supply during the brain's development. Zika is also a likely cause, although that's still unconfirmed. But there are other medical conditions that are known to cause microcephaly, and it's important for women who are pregnant or planning to become pregnant to familiarize themselves with the conditions and take steps to avoid infection in order to give their babies the best possible outcome.

Cytomegalovirus, or CMV, is a herpes virus that's common and usually harmless. Most healthy people are asymptomatic, and those who do develop symptoms may not realize that their fever, sore throat, fatigue, and swollen glands are CMV. The real issue is when an infected pregnant woman passes the virus to her baby.

While 80 percent of babies infected with cytomegalovirus at birth (congenital CMV infection) never develop symptoms, the rest may develop problems with their livers, lungs, or spleens, as well as seizures, hearing or vision loss, mental disabilities, and, of course, microcephaly. In rare cases, congenital CMV infection can be fatal.

CMV is transmitted through contact with bodily fluids of infected individuals (mainly children), so the best way to prevent infection is to stay the hell away from kids' urine and saliva, which is a good life goal to have, anyway. Parents and caregivers who can't avoid wiping a runny nose or changing a diaper are advised to wash their hands well and often after coming into contact with fluids that may be infected, and not to share drinks, utensils, or toothbrushes with children, because you should strive not to do that too often anyways.

Rubella, also known as German Measles, causes a two- to three-day rash and a low-grade fever in young children, while older children and adults may experience swollen glands, cold-like symptom, and aching joints. Half of patients are asymptomatic. However, rubella as a birth defect can cause microcephaly, deafness, cataracts, heart defects, mental retardation, and liver and spleen damage.

Rubella is transmitted by coughing and sneezing. It's also the "R" in the MMR vaccine, which, ahem, almost everyone should get anyway, so it's not much cause for concern.

Healthy people infected with Toxoplasma gondii are often asymptomatic, but the parasite can cause tender lymph nodes, muscle aches, and other minor flu-like symptoms that can last for months. If a mother becomes infected during or just before pregnancy, she can pass the infection on to the baby, which can cause a miscarriage or stillbirth. If carried to term, the baby may suffer from microcephaly, vision loss, mental disabilities, or seizures.

Many mothers and mothers-to-be recognize toxoplasmosis as their ticket to getting out of cleaning the litter box for nine months — the parasite can be found in cat feces. Outdoor cats can pick up the parasite by eating infected rodents or birds, while indoor cats are at risk if they eat raw meat. (Ew, why? I'm judging those cats.) The parasites then make their way into their litter box (or the garden) for as long as three weeks after infection. Toxoplasmosis can also be contracted by eating infected fruit or vegetables.

The best way for pregnant women to avoid toxoplasmosis is to tell their partners that they're off scooping duty until the baby's born, because they deserve to put their feet up and relax, anyway. Single ladies should wear latex gloves when dealing with cat poop and wash their hands well. Cats should be kept indoors (for many reasons), and for goodness' sake, don't feed them raw meat. They're not lions. Gloves should be worn while gardening, and fruit and vegetables should be washed thoroughly.