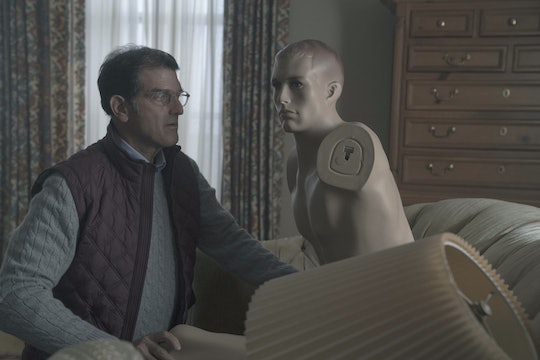 Castle Rock just keeps getting scarier, and in “Past Perfect” the town's murder count continues to rise. The town’s new residents — Gordon (Mark Harelik) a history professor from Iowa, and his wife (Lauren Bowles) — moved into Warden Lacy’s home and turned it into a bed and breakfast inspired by Castle Rock’s murderous history. The concept fits into the gothic setting of the show perfectly, but are there real murder-themed bed-and-breakfasts out there? Because macabre fans need a place to unwind too.

While there aren’t murder themed B & B’s just like the one shown on Castle Rock (thank God), there are some establishments that make a killing on their murderous and haunted pasts. The Lizzie Borden House in Falls River, Massachusetts advertises its brutal double murder history — Lizzie Borden killed her father and stepmother with a hatchet there in 1892 — and allows guests to stay in the rooms where the murders were committed. It even has ghost cams set up all throughout the house, so you can check in to see if Lizzie Borden’s ghost is roaming about.

According to their website, The Foley House Inn in Savannah, Georgia also promises guests will enjoy a haunted stay. The house was originally owned by Honora Foley in 1896, but when the house was being renovated in 1987, a human skeleton was found hidden inside a wall. While the remains weren’t conclusively identified, the inn’s website suggested that they belonged to a wealthy traveler who stayed at the home, and was possibly murdered for his money. Apparently, people have been hearing and seeing all kinds of weird things happen around the property, and the inn owners speculate that it could be tied to the spirits in the house.

Castle Rock is inspired by the fictional works of Stephen King, and if there’s one iconic and creepy hotel that stands out in King’s world, it is the Overlook Hotel from The Shining. The hotel that inspired his novel and was later used in Stanley Kubrick’s adapted film is The Stanley Hotel in Estes Park, Colorado. While it doesn’t have a murderous history to claim, the hotel is on the National Register for Historic Places. According to the hotel’s website, it was first built back in 1909 by inventor Freelan Oscar Stanley, the founder of The Stanley Motor Car Company and Stanley Steamer. The hotel rose to fame as King’s haunted, surreal antagonist in The Shining, and still boasts the same beautiful rooms, bar, and lobby from the film.

There are also plenty of murder mystery B & Bs around the country that offer guests the chance to role-play as they solve a murder. The historic Maple Hill Manor in Springfield, Kentucky has been hosting murder mysteries for nearly 30 years, and according to the inn’s website, guests mingle and socialize during dinner with a murder taking place by dessert. There’s also The Harry Packer Mansion in Jim Thorpe, Pennsylvania which allows guests to participate in creative murder mysteries, all based around the Packer family's factual background.

If you watched the last episode of Castle Rock, you know that its murder-themed B & B is not an ideal place to stay. Aside from all the macabre decor and paintings of The Kid scattered throughout the house, its the actual hosts that pose the biggest threat. Things are unfolding quickly in this dark, murderous town, and it will be interesting to see if the Lacey house — similar to the Overlook Hotel — has a role to play in all the madness.