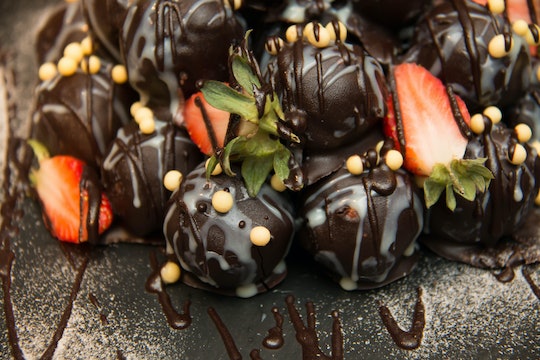 If a delectable meal filled with love-enhancing foods led to the conception of the current bun in your oven, you may be looking to recreate the mood for special night with your partner. Now that you're eating for two, certain foods are off limits, whether they turn up your libido or not. Are there special aphrodisiacs for pregnant women, so you can still get turned on without harming the baby? The good news is there are plenty of noshing options for a mama-to-be looking to turn up the heat, and just a few items you'll have to pass on.

Now that you're pregnant, there are a few aphrodisiacs that you won't be able to consume. But just because you have to (temporarily) say no to champagne, oysters, and coffee, doesn't mean you can't chow down on all the other foods known to put you in the mood. Although there are no aphrodisiacs specific to pregnancy, knowing which foods go the distance in the libido department will kick things up a few notches faster than you can say pregnancy hormones. Since you have more on your mind than ever now that you're growing a human, I've done the leg work of weeding through aphrodisiac foods to pluck out the ones backed by science among the many that are based on legend. This way you waste no time in knowing what to put on your plate if you want to get in the mood.

Vitamin C does more than help you fight the sniffles, a daily dose of strawberries can give you enough C to up your sex game. As Life Extension magazine pointed out, vitamin C ramps up your blood flow and sends extra blood to all the right places to help you get turned on.

There's a reason guac costs extra, and it could have to do with the powerful love potion this stone fruit is packing. According to PBS, avocados are loaded with vitamin E, which is known to make the skin glow, attracting all manner of lovers. The Aztecs believed so much in the force of this fruit, that virgins were forbidden outdoors while avocados were being harvested.

Any chocolate lover will tell you that sinking your teeth into a brownie gives them a rush, and it's not just opinion, there's science to back that blissfulness. Thanks to tryptophan and phenylethylamine, two chemicals found in chocolate that are linked to sexual arousal and falling in love, chowing down on this sweat treat can turn up the bedroom heat, the New York Times reported.

Want to start a tidal wave of tingles? Knock back some pomegranate. Whether eaten whole or consumed as a juice, pomegranate increases blood flood as genital sensitivity, according to Cosmopolitan magazine.

If pregnancy has your energy zapped and you can't get jazzed about your sex life, try perking up with some pesto. Pine nuts are loaded with zinc, which is known to pep up a sluggish mood, as Reader's Digest pointed out.

As long as you get the thumbs up from your health care provider to take ginseng during pregnancy, this herb may be the magic potion your sex drive needs. According to Good Housekeeping magazine, ginseng is used to boost sexual performance as well as athleticism.

When pregnancy cravings strike, you might not be able to blame the baby if it's one of these foods to feed your sex drive. Enjoy every minute of indulging in a tasty treat that may also have you feeling frisky.