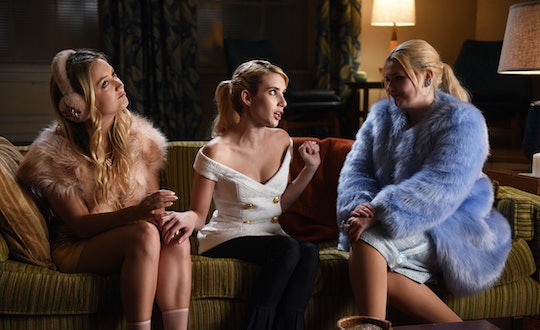 Are There Two Green Meanies On 'Scream Queens'? Anything Goes On This Show

There is a new costumed killer plaguing the Chanels and Co. on Scream Queens Season 2, and I am already pretty desperate to figure out who the murderer is behind the mask. This serial killer, dressed as a green monster with horns coming out of it's forehead appears, like Season 1's killer, to have a specific target in mind. But this time instead of going after sorority sisters, the killer is attacking patients at the hospital. It's way too early to say, but it does make me think that maybe this killer is like the Season 1 killer in more than one way. Could this mean that there are two Green Meanies on Scream Queens? After all, there was more than one Red Devil.

On Season 1, the psychopath in charge, Hester, had two Red Devil assistants who helped her carry out her dastardly deeds. On Season 2 of Scream Queens, if there is only one Green Meanie, well that already crosses off quite a few suspects. It can't be Chanel Number 5 because she was the one who was almost murdered by the guy in the first episode (though the Chanels contended that her story was "not that scary").

The solo killer theory also rules out Dean Munsch, who was about to unmask the killer when she was interrupted. It also rules out Dr. Cassidy and Zayday, who walked in on her. And of course, it would mean that there's no way Hester had anything to do with it really. Personally, I'm inclined to believe that all of these characters are innocent anyway, with the exception of Cassidy and his ice cold skin. But it's too easy just to know that they're innocent, there has to be some sort of mystery involved.

Obviously, the number one suspect right now is Kirstie Alley's Nurse Hoffel. She is strange, mean, and prone to eavesdropping. Theories are already popping up that she's the wife of the man a doctor and a nurse dumped into the lake that Halloween night 30 years ago, as well as the mother of the child born that night. And we all know what happens when babies are born on Scream Queens. Then again maybe Hester's pulling the strings from her prison cell — she certainly seemed to know a lot about our killer. Or maybe it really is Zayday, trying to sabotage Munsch's fake hospital.

We will just have to wait and see.