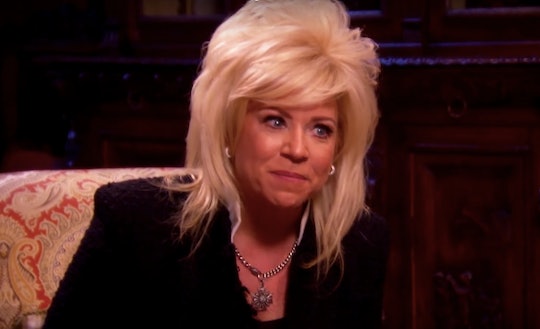 It's not uncommon to see married couples on reality shows go through tough times — and it may not just be for the cameras. Theresa and Larry Caputo of Long Island Medium are no different. Back in December, it was announced that they were separated, but are Theresa and Larry Caputo back together at this point in time? Fans may be disappointed by new developments of the Long Island Medium couple.

The couple had been married 28 years when they made a joint statement that they're splitting up. "After 28 years of marriage, we have decided to legally separate," Theresa and Larry said in a statement to Us Weekly. “We will always love each other and our two wonderful children. We are united in supporting each other and our family." In the statement, they refer to their two kids, Larry Jr. and Victoria. Long Island Medium is in its ninth season, and according to Us Weekly, Theresa was opening up about marital problems at the start of Season 8.

"I’m in the middle of a reading with Erin and my own emotions about my relationship with Larry got the best of me," Theresa said in a confessional during a Season 8 episode. "This is a really hard time right now with Larry and I, and I don’t know what’s going to happen. It’s just, it’s wearing on me." That episode aired Nov. 27 last year, and around a week later the split was announced.

Larry didn't share the same sentiments in that episode, but on the Season 8 finale he did open up about marital struggles. "We're having a difficult time. I think a lot of the frustration has to do with us not spending the time together anymore," Larry said to his close friend Danny. "Along with that comes the lack of communication so it's like losing your best friend. It's hard."

Larry continued that the pair have sought out professional help with a therapist, and they advised some time apart. "We're at a point where even the therapist is saying that maybe you should take a break from each other. I think the thing that bothers me right now is I don't know what the outcome of this is going to be and I just can't imagine our lives not together," Larry explained. "I just don't know where our lives would go from there."

Well, it's months later from the statement and the finale. Season 9 premiered earlier this month, and Long Island Medium fans were devastated to learn that Theresa and Larry are going through with a divorce. On the show, the couple made it appear that, over time, tension continued to grow in the house, and Larry felt like he "wasn't getting enough attention" from his wife due to the fact that she's now a famous reality star.

It's heartbreaking to watch a couple go through this on reality television — especially because it's suspect that it was potentially the source of some of their issues. Looking at Theresa's Instagram, though, she is spending time with friends, family, and on activities like golfing and the zoo. Of course, that doesn't make the sting of the divorce go away, but she seems to be taking proactive steps to get her mind off of it. As for Larry, I hope he's taking the same R&R as well. Maybe the rest of this Long Island Medium season won't be as devastating to watch as the beginning, but I won't get my hopes up.