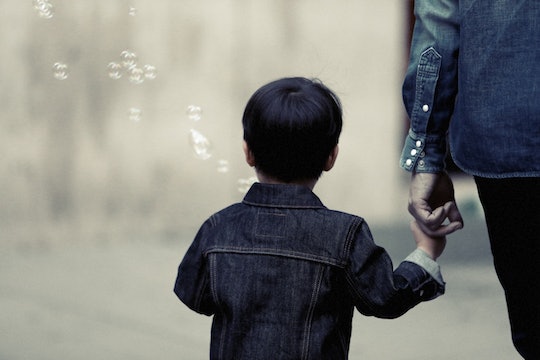 Although it’s still viewed by many as an unconventional family structure, some children have more than two legal guardians listed on their birth certificates. But how common are three-parent custody agreements actually? In New York, for example, CNN reported on Tuesday that a 10-year-old boy’s parents' unique situation granted his dad and two “mothers” legal custody of him after a lengthy legal battle, settling on a tri-custody agreement. That’s just one case, of course, but a three-parenting family dynamic is actually becoming more common.

New laws and cases are slowly making it more possible for a child’s birth certificate to list more than the customary two parents as long as the agreement is in the best interest of the child. In the most recent case in New York, the judge said the agreement was critical to the child's well-being because he is a “well adjusted 10-year-old boy who loves his father and his two mothers,” according to CNN.

While tri-parent custody agreements aren’t a brand new concept, they’ve only been around, legally, for a few years. As The Huffington Post reported in 2014, a child in Vancouver was the first child in British Columbia, Canada, to have three parents — a married lesbian couple and their male friend — listed on her official birth certificate.

“We wanted our kids to know where they came from biologically and actually liked the idea of having an extended family,” one of the Vancouver child’s mothers said of the parenting agreement, according to The National Post. “It didn’t threaten us to have another person’s involvement so long as it was the right person.”

Another instance occurred in Miami after a judge allowed a lesbian couple and a gay man to be listed on the birth certificate of a 23-month-old child back in 2013, following a lengthy legal battle, according to ABC News. The father, who had donated his sperm, argued that their situation should be handled differently under Florida law, which states that sperm donors do not have any parental rights, because the trio reportedly had a verbal agreement about custody.

A few years after the Miami case, in May 2015, Argentina became the first Latin American country to legally recognize of a three-parent family on a child's birth certificate, according to The Advocate.

As of 2015, only a handful of states in the United States have recognized this custody agreement. According to legal news site FindLaw, parents can seek a tri-custody agreement in California (the only state that explicitly allows it) and in Louisiana, Oregon, Washington, Massachusetts, Alaska, the District of Columbia, and Delaware.

In other words, while this type of custody agreement isn't unprecedented, it's also not a norm that many states and countries around the world legally recognize. It's likely that there will be many more legal battles ahead until the three-parenting dynamic is welcomed without question, but progress towards this family structure is certainly in the works.