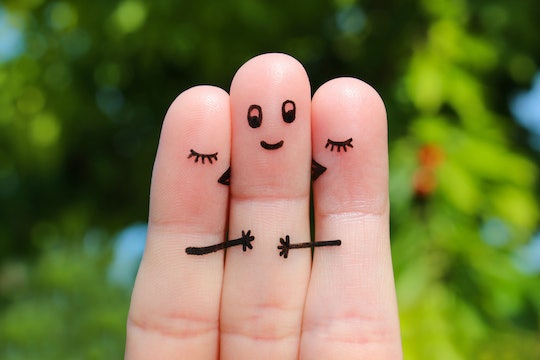 Are Threesomes Safe For Pregnant Women?

Eric Marlowe Garrison, a clinical and forensic sexologist, author of Mastering Multiple Position Sex, and who teaches about healthy sexuality at William & Mary, echoes Grinonneau-Denton's sentiment and adds that couples need to be very clear about their own expectations and how they want to communicate them. In an interview with Romper, he says couples should consider the following questions:

You may also want to discuss boundaries and set up solid ground rules for the act itself, Dr. Rachel Needle, a licensed psychologist and certified sex therapist tells Romper. These rules should include specifics about what you and your partner are comfortable with, and should be discussed and settled on before you get into bed with the third party.

"All participants (even the third party) should be on the same page about the sexual boundaries and what is off limits and what is fair game," Needle says. "It is also extremely important to know that if one of you is not comfortable, you can stop at any point in time. Establish a safe word or a way to check in with your partner to make sure you are wanting to continue. If not, it is ok to stop."

"There is no physiological reason that sexual intercourse will hurt the baby", Grinonneau-Denton says. "The only caveat to this is that for women with a history of miscarriages, some OBs do suggest abstaining or keeping sex to a minimum for the first three months. However, there is no empirical data that I know of that suggests miscarriage being caused by sexual intercourse. So, this is just a precaution."

"She needs to be in charge," Garrison says. "She also needs to be attuned to her body, so she knows what it is telling her. Many women like to be on top, so that there is not the pain of a person on the baby."

"If I was going to pick a time during a couple’s life, pregnancy would probably not be the most optimal time," she says. "Although I wouldn’t say it should be absolutely avoided. In this case, communication and attention to emotional communication should be attended to."

More Like This
Yes, It’s Possible To Get Pregnant If You Have An IUD
50 Love Song Quotes That’ll Give You The Feels
Bringing Home A Partner For The Holidays Isn't Always A Hallmark Movie
50 Warm & Wise Quotes About Blended Families