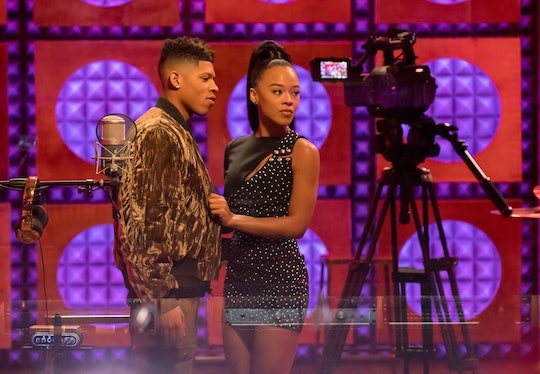 Hakeem is trying to be more mature since turning 21 on Empire — and becoming a father — but it's hard to break out of his playboy ways. He had a child with his father's wife, Anika, but he's currently dating fellow singer Tiana. That's already complicated, but it gets even more complicated from there. On Wednesday night's episode, "Civil Hands Unclean," viewers saw another dimension of their relationship. Tiana seemed to be romantically involved with Tory Ash, an Amy Winehouse-like artist Jamal met in rehab. Are Tory and Tiana dating on Empire? Fans on Twitter freaked out about the reveal.

Where did Tory even come from? Well, she's the latest artist to record with the Empire crew. Jamal met her when recovering from his addiction; she's also faced similar troubles. Now, she's back in the recording studio, and canoodling with other artists, it seems. Tory brought the house down with her song "Crazy Crazy 4 U" with her sultry vocals, and on Wednesday the audience saw a more personal side of her. While Hakeem talked about being a father and wanting to be there for his baby, Bella, Tiana wasn't the only one in the room during his little speech. She was in the bath tub with Tory, and it definitely was not platonic. Needless to say, Twitter fans blew up during the scene:

Hakeem, being Hakeem, wanted to get involved too. Tiana and Tory told him they were going to a party later on, but he wasn't exactly invited. This was apparently an "all girl party," so Hakeem's not really welcome. That didn't stop him from getting in the tub with them, but that's besides the point. In an already unorthodox relationship between him and Tiana (seeing as he had a child with his father's wife and all), the scene adds another element to the mix. Are Tiana and Tory actually dating?

It's already established that Tiana identifies as bisexual, but this a new development with Tory's character. Seeing as viewers just saw them in that scene together, and it was more sexual than romantic, they might not actually be dating. Whether Tiana and Hakeem have an open relationship isn't official, but it can be assumed now. This is the first time Tory and Tiana are seen together, but it may not be the last. Hakeem seems fine with it now, but this could definitely change. Tory and Tiana may hit it off at this party and want to be more than a hook-up. Given Empire's track record, all three's relationship statuses could soon change.

More Like This
Twitter Is Applauding Jennette McCurdy For Speaking Out About Toxic Mom In Memoir
Netflix Reveals The Official Teaser Trailer for Wednesday
Kristin Bell Shared Some Sweet, Rare Photos Of Her Daughters From A Family Vacation
What Parents Need To Know About Marvel's New She-Hulk Series Coming To Disney+