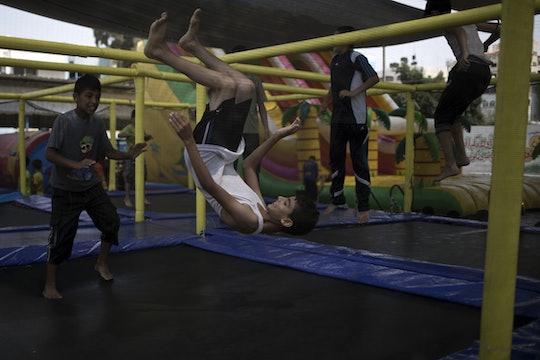 As the mother of two very energetic young children, one of our favorite ways to pass some time last winter (when heavy snow meant the park was out of the question) was to hit up our local trampoline park during it's designated "toddler time." I liked that my kids had the chance to bounce out all of their energy on the park's wall-to-wall trampolines, without the risk of falling off the side or bumping into bigger, stronger kids. Afterward, they'd both be ready for a nap, and that seemed like a giant win as far as I was concerned. But are trampoline parks safe for kids? While neither of my children (or anybody else's children while we were there) experienced any injuries, a recent study published in Pediatrics shows that, with the popularity of trampoline parks booming over the past few years, the number of injuries has risen right along with it. And, despite trampoline parks seeming like a safer alternative to a backyard trampoline (which, to me, just seems like a broken ankle waiting to happen), it turns out that injuries from trampoline parks can be even more serious than those occurring at home.

According to NPR, the Pediatrics study found that over the past six years, the number of hospital ER visits stemming from trampoline parks increased from fewer than 600 a year to almost 7,000. This likely has a lot to do with the fact that trampoline parks have experienced huge growth during this time period: according to the International Association of Trampoline Parks, "the indoor trampoline park industry is one of the fastest growing segments of the amusement industry," with over 550 indoor parks slated to have open by the end of 2015. In fact, the IATP estimates "more than 50 million people visited trampoline parks in North America," last year alone.

It stands to reason, of course, that if significantly more people are visiting these parks, then a rise in injuries is going to be expected. But Dr. Gary Smith of Nationwide Children's Hospital in Columbus, Ohio, told TODAY in 2014 (when trampoline parks were first seeing an uptick in popularity) that parents should be aware that visits to a trampoline park might carry more risk than they realize, even if the facilities are staffed. Smith said, "our concern is there is very little oversight over the safety. [Trampoline] designs [used in parks] are not safer, for example, than a backyard trampoline."

According to CBS News, while the IATP has developed safety guidelines for its members, there are no federal regulations for trampoline parks, and more states do not have any kind of safety laws. This means that, while it is entirely possible for kids to visit trampoline parks safely and without injury, there's no way of ensuring that steps have been taken to ensure any preventable injuries could be avoided.

Perhaps the most concerning finding from the study though — and the one that many parents would likely find alarming — is that it's not just a greater number of injuries, but a greater number of really serious ones. While the majority of trampoline-related injuries still occur on backyard trampolines, injuries at trampoline parks are more likely to require hospital admission, more likely to involve dislocation, and have rarely resulted in spinal cord injuries, traumatic brain injuries, and death. (Due to the enclosed nature of trampoline parks, there is a lower risk than with home trampolines of upper-extremity fractures, however, which normally occur as a result of falling off.)

As someone who has seen these injuries first-hand, emergency medicine physician Katherine Leaming-Van Zandt, told NPR, "I don't think parents realize how significant the injuries can be or how frequently they occur," and explained that trampoline parks can sometimes seem safer than they actually are.

So what does that mean for parents? The American Academy of Pediatrics already advises against backyard trampolines, and recommends that pediatricians discourage parents from allowing their children to participate in recreational trampolining, noting that the younger a child is, the greater the risk for injury. The American Academy of Orthopaedic Surgeons advises parents not to let their children use recreational trampolines unsupervised, that jumps and flips be avoided, and that only one person jumps on a trampoline at a time. Keeping young children away from bigger children if possible is also a good idea, and, in general, closely supervising kids on trampolines can help keep children safe.

Trampoline parks are a fun way to stay active — and honestly, what kid doesn't love bouncing on a trampoline? — but as with all activities, parents should be well aware of the risks involved to best avoid serious injury.