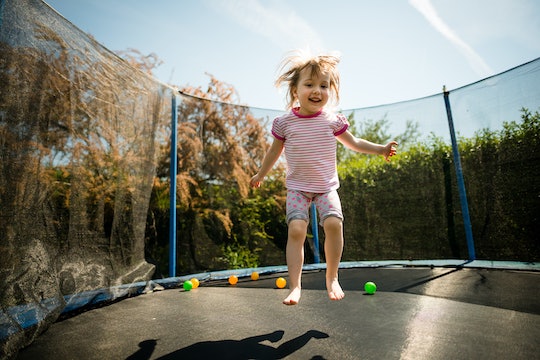 My siblings and I begged our parents for a trampoline every summer like clockwork. We were shot down just as routinely. You see, my mother has been an Emergency Room Nursing Director for many years, and the trampoline accidents she'd seen were multitudinous — we were never getting one. All of her advice against the backyard toy would prove justified when my sister absolutely destroyed her ankle on a neighbor's trampoline one summer. 25 years later, she still has problems with that ankle. When I asked some MDs if trampolines are safe, they did not hold back — much like my mother.

More Like This
These Couches Are Perfect For Climbing If The Nugget Couch Is Sold Out
Best Montessori Learning Towers: 11 Kitchen Helper Stools For Toddlers
10 Crafts To Do With Grandparents
15 Face Masks For Kids That Are Cute, Comfortable, & Get The Job Done

To be fair, the statistics are harrowing. A report released by the American Academy of Pediatrics noted that "Trampoline use poses significant risk of injury to children.Estimates from the National Electronic Injury Surveillance System (NEISS) show that trampoline injuries result in nearly 100,000 emergency department visits a year." And those are just the reported injuries where someone has taken the time to see their doctor. How many of us will go and spend many hours and thousands of dollars for a sprained ankle or wrist? It's quite possible the number is much higher. Most of the injuries were lower extremity injuries, like broken ankles and torn ligaments in the knees, but older jumpers also run a fairly high risk of joint dislocation.

As someone who has had that happen more than a few times, I will tell you, it is horribly painful, and you want to avoid that if at all possible.

I contacted several doctors and they did not mince words. During one Skype interview, the doctor actually sat back, took a sip of his coffee, looked at me, and said "How much time do you have?" It was like a scene straight out of a movie. They did not care if the trampoline was encased in a net, dug into the ground, at a jump park, or on the moon, there was no equivocation — trampolines are dangerous, no matter how darned fun they are.

The associate medical director of trauma and emergency medicine specialist at Yale Medicine Marc Auerbach, MD admits that trampolines are really fun, and can be great exercise, but also tells Romper that "we see many injuries from trampoline use in children and adults in the emergency department and this activity is not without risk. Many of the injured patients express surprise after their injury (in contrast to some other known high risk activities)." How often are we in denial that something we think is fun could also be dangerous? Pretty often, I'd guess. "Prior to the spread of indoor parks, most of these injuries were isolated in the summer," he says. "Now we see them year-round and they are getting more common and more severe. Most commonly these are fractures, sprains, bruises, and concussions. However, more serious head and neck injuries can also be seen." But, Auerbach also tells Romper that he'd let his family use a trampoline, provided they took all the necessary precautions.

Danelle Fisher, MD, vice chair of pediatrics at Providence Saint John's Health Center in Santa Monica, California, tells Romper, "Trampolines are fun and children love to bounce, so they seem attractive as a backyard fixture, but there are many dangers to trampolines. Children can be hurt in a trampoline by colliding with another child, falling onto the springs or frame of the trampoline, or falling from the trampoline to the ground. These injuries occur at a high velocity due to the force of the bounce."

She says that her 7-yea- old loves them, but she supervises him, and makes sure that the trampoline is in excellent condition before allowing him to jump. She also notes that it's not a sport for a lot of kids to do at once. According to her, at most, one other person could be on the trampoline at a time.

Let's be honest, at some point, your kid is probably going to get on a trampoline. The AAP recommends that you supervise your children closely, make sure the trampoline is in great shape (taut, not worn, either springless or well-covered springs), and that they're not trying anything too acrobatic. I'll admit that I've taken my son to a jump park, and I probably had more fun than he did. It's a really good time, but just like anything, it can be dangerous. Take precautions and have a good time.