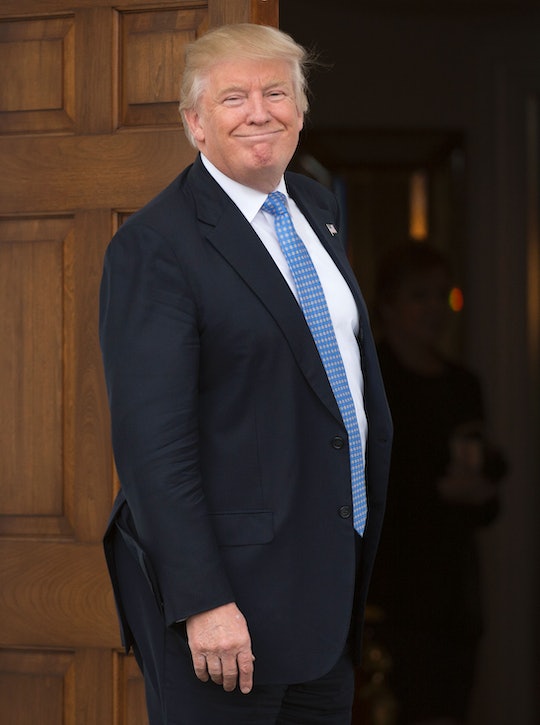 There have been wide misgivings about President-elect Donald Trump's plans to handle conflicts of interest between his international business and his duties as president. So far, Trump has done little to assuage the fear that the lines are continually being blurred between the Trump business and administration. Are Trump's business ties a conflict of interest? Reports are already accusing Trump of crossing a line in one of his first phone calls after the election.

Argentine newspaper La Nacion reported that when Argentine President Mauricio Macri put in a call to Trump to congratulate him on winning the election, Trump took the opportunity to ask the president to ask for help with a construction project in Buenos Aries, according to Talking Points Memo. "Macri called him," Argentine journalist Jorge Lanata wrote in his La Nacion article, which was translated by TPM. "This still hasn’t emerged but Trump asked for them to authorize a building he’s constructing in Buenos Aires, it wasn’t just a geopolitical chat."

Romper reached out to Trump's representative for comment, but has not yet received a response.

As Republican political veteran David Frum pointed out in a tweet after the news broke about Trump's call with Macri, if the President-elect followed standard protocols for presidents talking to agents of foreign governments, the reports would be easily refuted.

But, according to a report from Reuters, Trump was speaking with foreign leaders and governments without input or briefings from the State Department, and without regard to how these interactions are generally handled. It's probably unlikely Trump took the trouble to have someone taking notes if he didn't even bother to request a briefing with the State Department before making contact with foreign governments as the President-elect.

Then there's the Trump hotel in Washington D.C., which has already started marketing to foreign diplomats with a reception last Tuesday offering tours of the new D.C. property, along with Trump branded champagne and sliders, according to the Washington Post.

"Why wouldn’t I stay at his hotel blocks from the White House, so I can tell the new president, ‘I love your new hotel!’ Isn’t it rude to come to his city and say, ‘I am staying at your competitor?’ ” one Asian diplomat told the Post.

This arrangement that would essentially funnel money from representatives of foreign governments to the sitting President of the United States, according to TIME, could violate the Constitution's "emolument clause" which prohibits presidents from receiving gifts from foreign "agents."

In addition to hotel bookings, according to Vox, the Trump organization is currently working on deals with the Indian government that are valued at more than $1.5 billion. Trump reportedly met with his Indian business partners after the election, Vox said.

Trump's children, who he's said will run the Trump business, don't seem particularly concerned about ethics dilemmas either. Jared Kushner, Trump's son-in-law and husband to Ivanka, has assumed a prominent, although not altogether clearly defined, role in the Trump administration, despite nepotism rules for federal government employees, according to the New York Times. Lawyers for Trump are already looking for a legal loophole to get Kushner in the West Wing, according to the Times.

Perhaps as a signal for things to come for our country's foreign relations, both Kusher and Ivanka were photographed by foreign press in a meeting between the Japanese Prime Minister Shinzo Abe and President-elect Trump. Even without the business conflicts of interest, family members in such a high-level meeting would have raised eyebrows, according to Fortune Magazine.

“This is not the way we behave in the world’s leading constitutional democracy,” says Norman Eisen, ethics adviser to President Barack Obama, told Fortune. “It’s like something out of a tin-pot oligarchy.”

Over the weekend, newly named Trump Chief of Staff Reince Priebus dismissed concerns over Trump's business conflicts on CNN's State of The Union saying, according to Vox:

Donald Trump has been very clear from the very beginning that his family is very important to him. And I think that while it’s unique, it’s certainly compliant with the law. And obviously we will comply with all of those laws, and we will have our White House counsel review all of these things, and we will have every "i" dotted and every "t" crossed, and I can assure the American people that there wouldn’t be any wrongdoing, or any sort of undue influence, over any decision-making.

Although every previous president has taken great pains to divest business or place their interests in a blind trust to avoid any semblance of self-dealing, Trump doesn't seem interested in following that tradition.

Trump has still not released his tax returns, and, as the Washington Post reported, has only committed to letting his children run his company, which would do little to assure his decisions in the Oval Office wouldn't be swayed by an interest in enriching his own family business.

Instead, if Trump is genuinely interested in keeping the public's trust, according to the Post, he would need to either liquidate the business, put it in a sincere blind trust, which would mean his children couldn't run the business, or sell the business to his kids outright.

Besides, the multi-billion dollar real estate business, the Trumps are also going to be in a position to parlay their new political fame into sales of their other brands and products. Trump's daughter Ivanka recently drew criticism for using an interview with 60 Minutes to sell jewelry, according to CBS News.

Nope. No conflict of interest or self enrichment to see here.