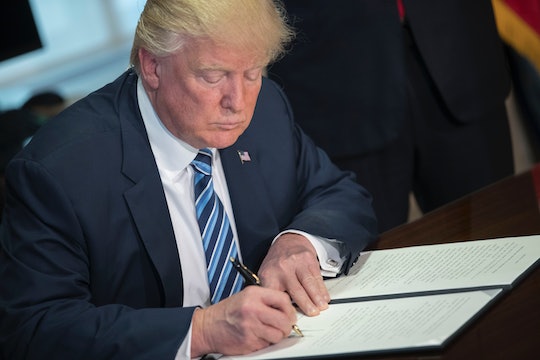 Frustrated by the Republican-led Congress' inability to repeal and replace the Affordable Care Act, President Donald Trump has now taken matters into his own hands as he struggles to fulfill one of his key campaign promises. But are Trump's Obamacare executive orders legal? That depends on who you ask. Trump issued one order on Thursday, and another on Friday, and already, at least two state attorneys general are threatening the administration with legal action. It's likely that several judges will be asked to weigh in before the matter is settled.

Thursday's executive order would ease restrictions for association health care plans, allowing small businesses to join together to purchase group coverage for employees. These plans would no longer be required to follow the same Obamacare rules that require them to cover essential health benefits such as prescription drug coverage, reproductive health care, mental health, and substance abuse. This would likely lead to more young, healthy people purchasing lower-cost, lower-coverage plans, meaning they would no longer subsidize insurance costs for less healthy citizens, according to CNN. Those who need insurance most would be faced with skyrocketing health insurance premiums, and because of the broad language of the order, some fear that new plans could even refuse to cover those with preexisting conditions.

The second executive order, signed on Friday, would put an end to cost-sharing reduction, or CSR, payments. Federally-contracted insurance companies are required by law to make deductibles and other costs more affordable for eligible patients, and CSR payments from the federal government helped to offset the costs of subsidizing care for millions of lower-income Americans. Without the government helping to pick up the tab, the Washington Post reported, insurance companies may back out of their contracts to offer coverage on the ACA exchange for 2018. In a joint statement, House Minority Leader Nancy Pelosi and Senate Minority Leader Chuck Schumer called the order is "a spiteful act of vast, pointless sabotage leveled at working families and the middle class in every corner of America."

CSR payments have long been debated, and in 2014, the House of Representatives sued the Department of Health and Human Services over them, arguing that the department were not authorized by the Affordable Care Act, and in fact required authorization by Congress. The case has been pending before the U.S. Court of Appeals. When Trump took office, his administration inherited the case, and the responsibility to defend CSR payments, but in August, the court granted a motion filed by 18 state attorneys general allowing Democrats to take up the fight that the Trump administration abandoned, according to Reuters.

Now, the two attorneys general who spearheaded the motion, Eric Schneiderman of New York and Xavier Becerra of California, have warned the Trump administration that they're prepared to keep defending CSR payments in court. "I will not allow President Trump to once again use New York families as political pawns in his dangerous, partisan campaign to eviscerate the Affordable Care Act at any cost," Schneiderman said in a statement. On Thursday night, Becerra tweeted that he's also "prepared to sue the Trump Administration to protect health subsidies."

The administration, however, contends that CSR payments were never legal to begin with. The justification for stopping the payments was laid out in a legal opinion sent by Attorney General Jeff Sessions to Treasury Secretary Steve Mnuchin and acting HHS Secretary Don Wright on Wednesday. Sessions argued that although the ACA authorized the payments, it "did not itself provide an appropriation to directly fund" them, and that "it is up to Congress to decide which programs it will and will not fund." These days, getting Congress to agree on anything is virtually impossible, so it's anyone's guess if the payments will re-authorized. Expect a lengthy legal battle ahead.