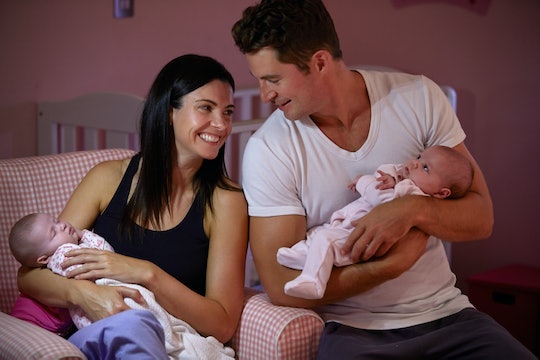 Before I got pregnant, I worried constantly if I was going to get pregnant with twins because twins run in my family. I worried even more after I started taking fertility drugs. Having one baby was daunting enough, but the idea of being pregnant with two seemed to quadruple my nerves and fear. What would I do with twins in my tiny New York City apartment? Keep one in a drawer? The twins are on my mother's side, but are twins from the mom or the dad?

It turns out that it's not only genetics that matter, but also the type of twins being discussed. In my family, the most recent set of twins was identical, which, according to Stanford University, is a freak occurrence that just happens sometimes when a fertilized egg splits. However, fraternal twins, the type born of two separate fertilized eggs, are genetic. According to Stanford, the likelihood of twins during any particular pregnancy comes from the mother, because, as they put it, "A father’s genes can’t make a woman release two eggs."

If you're the woman who is trying to conceive though, it's not just your mom's genetics that matter. You can inherit the trait from your father. Your partner's sperm may having nothing to do with it, but your father's DNA does, according to Science Mag.

The science of twins is something that was fairly unknown for a long time. Until scientists really became interested in the ins-and-outs of inherited traits and what that might mean for pregnancies, we all just sort of guessed at it. Personally, I'm glad I'm having my children in the epoch of ultrasounds and advanced testing. Can you imagine just 70 or so years ago, going in to deliver your child, pushing that baby out, only to be surprised that a second one is lined up ready to go? Talk about a shock. (I hope you knitted enough booties, Grandma.)

According to Columbia University's Go Ask Alice, "There are certain genes involved in ovulation that induce hyper-ovulation, or the release of multiple eggs. If you have these genes, your chances of fertilizing two different eggs by two different sperm increases, resulting in fraternal twinning." Basically, your ovaries are winning at twinning.

Are twins on the mom's side in all instances? No. According to Science Mag, there are multiple factors at play in the creation of twins. They wrote, "In vitro fertilization, for which demand has surged, is more likely to yield twins. Older women, who are having more children than in the past, are also more likely to release more than one egg, increasing their chances of giving birth to fraternal twins."

Age and genetics are important, but apparently, so is race. According to an article in The New York Times, "Twin births have historically been more common among non-Hispanic black women." Although the reason for this disparity in pregnancies is still unknown.

Twins are tricky. If you're older, if you're getting IVF, if you're a woman and either of your parents have fraternal twins in their family tree, or if you're black, or some combination of these, you're more likely to find yourself doubly pregnant. Even if you have absolutely none of these, there's still a chance. If you're a 24-year-old Norwegian fertile turtle and an only child from a line of only children, you still have a chance of conceiving fraternal twins, noted Stanford University.

As for having identical twins? It's a bit like getting struck by lightning or meeting Lenny Kravitz in an elevator that gets stuck for three hours. Some of us are just lucky.