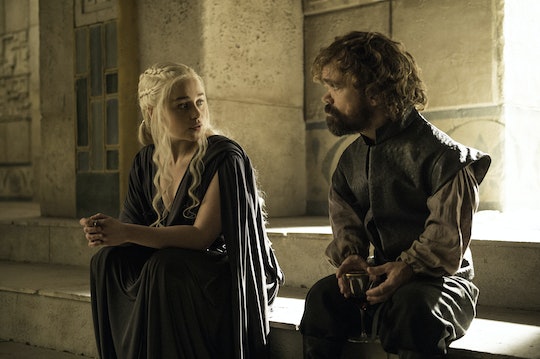 This 'Game Of Thrones' Theory Is Poised To Become A Reality

There are only two, truncated Game of Thrones seasons left for D.B. Weiss and David Benioff to tie up loose ends, and since we're literally off-book from here on out, speculating about where the series will go becomes difficult. At the end of last season, the series' worst kept secret, R+L=J, was finally confirmed: Jon Snow is the son of Rhaegar Targaryen and Lyanna Stark, making him a Targaryen and Daenerys' nephew, not a Stark bastard as he originally thought. But another fan theory posits that there's a third secret Targaryen in our midst. So are Tyrion and Daenerys related on Game of Thrones? Here's what fans are thinking.

There's significant evidence in the books which points to Tyrion being the son of not Tywin and Joanna Lannister, but of Mad King Aerys Targaryen and Joanna Lannister. This would make him Dany's half-brother and, potentially, the rightful heir to the Iron Throne. The theory goes that Aerys appointed Tywin to be Hand of the King for the excuse to send him all over the Seven Kingdoms, while Aerys stayed in Kings Landing, either seducing or coercing Tywin's wife Joanna. When Tywin learned that Joanna was pregnant, realizing that his paternity would be impossible, he drugged her in an attempt to induce abortion. He failed, but Tyrion's deformities and Joanna's subsequent death during childbirth were side-effects of the botched abortion attempt.

This would explain why Tywin helped Robert Baratheon overthrow the Mad King, betraying him even though he was the Hand of the King. Plus, Tywin harbors a deep-seated resentment of Tyrion, which has always been explained away as a belief that Tyrion was somehow responsible for the death of his mother by being born. But it could be that Tywin knew Tyrion wasn't his child all along. He refused to give Tyrion Casterly Rock, even though he should be the rightful heir, and he disavowed Tyrion on several occasions, claiming he's no son of his.

Tyrion himself also bears signs of being a Targaryen. In the books, he's described as having that signature white-blond Targaryen hair, and he has eyes of two different colors — a trait he shares with a long-ago bastard of an old Targaryen king. He's also always had an obsession with dragons and is the only person besides Dany who can tame them, which we know is a Targaryen trick. Finally, Daenerys hears a prophecy in the House of the Undying that foretells that "the dragon has three heads." Could this point to Daenerys, Jon, and Tyrion as the three Targaryens poised to rule? Tune into the Season 7 premiere of Game of Thrones on July 16 to find out.