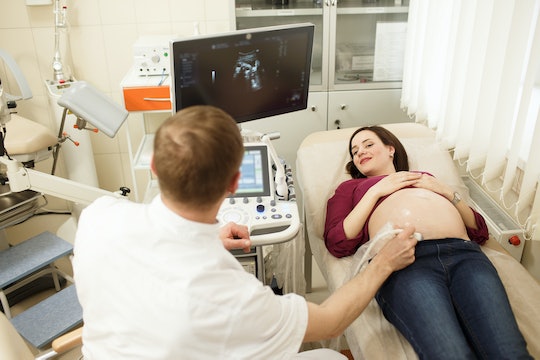 Before You Panic About Your Baby's Ultrasound Weight, Here's What You Should Know

When I was getting ready to have my daughter, my doctor noticed that I was measuring too small for my due date. I was terrified and unsure of what was going on; I only knew that I was being sent in for an ultrasound to determine how big my baby actually was. In the waiting room with me sat a mom with the opposite problem — the doctors thought that her baby was measuring too large. This is a common occurrence at clinics around the country, but given the dire consequences, it's important to know: are ultrasound weights accurate?

In the past decade there's been a real turn in the tide of women's health, especially surrounding childbirth and C-sections. More and more women are demanding more transparency in the research and access to the reasoning behind why their doctors are deciding that they should forego vaginal delivery and instead opt for C-sections, noted Brazilian researchers. One of the primary reasons given to mothers was that their baby was "measuring too large" to be delivered safely via vaginal birth. The doctors weighs the risks and benefits of a vaginal delivery based on the perceived size of the child and often determines that the best course of action is a C-section. However, studies have shown that there is a large margin of error in fetal size measurement via ultrasonography, which makes women wonder if that should remain the gold standard.

There is now an abundance of research that calls the practice into question. Robyn Horsager-Boehrer, M.D., Chief of Obstetrics and Gynecology at UT Southwestern Medical Center’s William P. Clements Jr. University Hospital, recently wrote that the act of predicting the weight of a baby while it's still in utero is really complicated, and prone to error. "In a recent study, one-third of women reported their OB provider told them their baby might be getting 'quite large' near the end of pregnancy," she said. "In the end, however, only one in five of those women had a baby that weighed more than 8 pounds, 13 ounces or 4000 grams, a common threshold for labeling a baby 'large.'"

However, it remains on of the few tools at a doctor's disposal when it comes to understanding how a baby is growing and developing and how it will react to labor and delivery. For researchers trying to determine if ultrasound weights are accurate, they're forced to look at massive amounts of data, given how common the practice is. What they've found as recently as February of 2018, is that while it's still a prescribed test across the world, it has a significant error rate somewhere around 40 percent.

Horsager-Boehrer said that the closer a woman is to her due date, and the larger the baby is, the more inaccurate the test becomes. "For a 9-pound baby, an ultrasound’s predictive accuracy is typically 15 to 20 percent off. Which means we may over- or underestimate by more than a pound," she said.The New York Times reported that this often leads women to undergo unnecessary C-sections. Anecdotally, this is the case among many of my friends. When I asked several of my closest friends who had C-sections, six of the 15 women said they had one because their babies were projected to be too big for a vaginal birth, but four of those women had babies under 8 pounds. (To be completely fair, one of those women had a baby who was almost 13 pounds at birth, really skewing the averages.)

Because doctors are becoming more aware of this inaccuracy, they're looking more closely at other predictors for large births and reasons for C-section, evaluating all symptoms in relation. However, because ultrasound is still one of the only means of predicting fetal size, it's unlikely to go away as a tool any time soon. As for my baby? It turns out her head was already descending into my birth canal, making my stomach measure smaller. She was born a healthy 7 pounds, 4 ounces, and is now begging me to watch Batdad videos with her. Ultrasound could not have predicted Batdad, that's for sure, but maybe they'll get better at predicting fetal weights soon.

Editor's note: This article has been updated with Dr. Horsager-Boehrer's correct university affiliation.

More Like This
What Is RSV?
Here’s How To Keep Your Baby Safe When Their Older Sibling Is Sick
35 Rare Girl Names As Unique As Your Child
25 Baby Girl Names That Begin With D