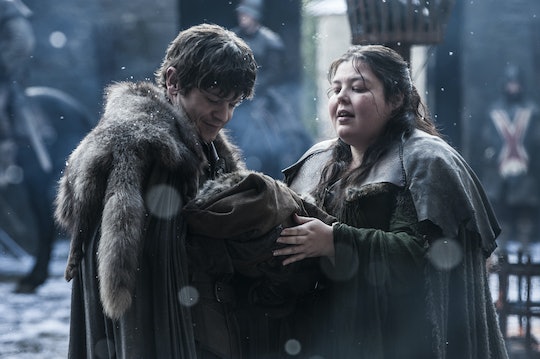 Ramsay Bolton is the worst. Any time someone might start to forget that he's the worst, he does his best to remind them. In Game of Thrones' "Home," Ramsay topped himself yet again as he struck down everyone in his way in a bid for power. Since he's a bastard (literally and figuratively), any legitimate child his father Roose has would immediately usurp Ramsay's position. This became a real danger when Roose's wife became pregnant; it became a reality when she gave birth to a son. While it was safe to assume Ramsay was going to strike out at them in some way, it was still shocking how he did it. After pulling ol' dad in for a hug that ended in some stabbing, Ramsay lured Walda and her baby into the kennels, where he loosed the dogs on her. But are Walda and baby Bolton really dead?

A newborn baby being eaten by vicious dogs is dark even for Game of Thrones. The scene itself is horrifying though not explicit, which could leave room for interpretation. Walda begs for her life and for the life of her child, but Ramsay is expectedly unmoved; though the implication of the outcome is clear, audiences don't see Walda or the baby's bodies.

However, it doesn't seem likely that Ramsay would have let her live even if she and her son did survive being mauled. In the books, Ramsay is known for killing his legitimate brothers; in A Clash of Kings, Roose says in a letter, "The trueborn sons my young wife has promised me would never have been safe while he lived." In addition to the babies, in the books Ramsay has an older brother named Domeric Bolton, Roose's heir, who dies (most likely) thanks to Ramsay poisoning him. Again, Roose says it best in A Dance with Dragons: "Ramsay killed him. [...] Now his bones lie beneath the Dreadfort with the bones of his brothers, who died still in the cradle, and I am left with Ramsay."

Considering Ramsay's fratricidal tendencies, the odds of the newest Bolton and his mom making it through their encounter are slim to none. Episode writer Dave Hill seemed to confirm this when he told Entertainment Weekly, "What he cares most about is power. As long as he was the sole son, the only possible heir, it was fine."

Ramsay might feel a little teensy tiny twinge of remorse over his actions, but his goals are more important to him than the horrible steps he takes to reach them. He can't be the heir to Winterfell and the Dreadfort with Walda and the baby around, so they are definitely dead.