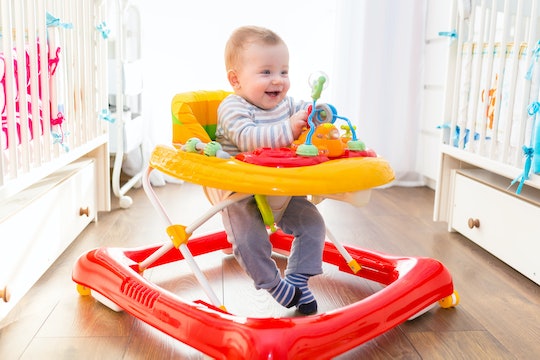 When I was pregnant with my daughter, I suddenly became a super sleuth, researching "the best of" and "safe alternatives" for everything ranging from toys to onesies to cribs. When it came to an activity center that I would use when she became older, I landed on an Exersaucer. I never even considered a baby walker as an option because I had heard enough horror stories (including my own tumble down the steps as an infant). But are walkers bad for babies?

"Infant walkers pose a safety risk and can be bad for babies. Babies may be injured while using infant walkers," Texas-based Dr. Eboni Hollier, who is board-certified in both general and developmental and behavioral pediatrics, tells Romper in an email interview. "Most of these injuries occur when babies fall down the stairs or fall over and injure their head."

Added to the risk of injury, Hollier says, is the fact that walkers provide no clear benefit. "Infant walkers do not help babies learn to walk sooner," she says. "In fact, their use may possible delay typical motor skills development."

In 1999, an estimated 8,800 children younger than 15 months were treated in hospital emergency departments in the United States for injuries associated with infant walkers, according to a 2001 report by the American Academy of Pediatrics (AAP). "The use of warning labels, public education, adult supervision during walker use, and stair gates have all been demonstrated to be insufficient strategies to prevent injuries associated with infant walkers," noted the AAP.

Hollier says the AAP also asserts that if parents insist on using infant walkers, it is recommended that a safety gate or door be placed at the top of stairs. "Also there should be constant adult supervision when infant walkers are in use and care should be made to keep the child away from potentially harmful things, such as hot items from the stove or sources of water such as the toilet, bathtub, or swimming pool," she says.

Safer alternative to infant walkers are stationary activity centers, like the Skip Hop Explore & More (Babies "R" Us, $120) or Oribel PortaPlay 4-in-1 Foldable Travel Activity Center ($130, Amazon), according to Hollier.

"These stationary activity centers allow children to bounce, swivel, and tip, and they provide parents an alternative to the use of mobile infant walkers," the AAP noted.

And the consensus amongst experts is pretty much the same. In fact, according to a September ABC News report, most pediatricians agree that infant walkers should be banned.

"In just one second, a baby can move 4 feet in a walker with wheels that move," Gary Smith, a pediatrician and director of the Center for Injury Research and Policy at the Children's Hospital in Columbus, Ohio, told ABC News. "And that's not enough time for a parent to catch a baby in a walker who is falling down the stairs or to prevent a baby's finger from being pinched in a door."

As of April 2007, Canada has banned the sale, importation and advertising of all baby walkers, according to Baby Center. "It's against the law to even sell a used baby walker at a garage sale or flea market," the website noted.

It's natural, of course, for parents to seek out tools and toys for keeping their kids occupied — how else would you ever get anything done, right? But because of the many cons related to the use of a walker, it seems like your best option is to consider one of the many alternative options that are on the market today.

Of course, that's easier said than done, but, lucky for you, some do-gooders have done the research on the best activity centers for your little one.

More Like This
How To Breastfeed A Baby With A Cleft Lip Or Cleft Palate
Here's Why Wearing Long Sleeves In The Summer Can Be Good For Your Baby
Why Babies Love Water, According To Experts
Can You Get The Covid Vaccine For Kids Under 5 At Publix?