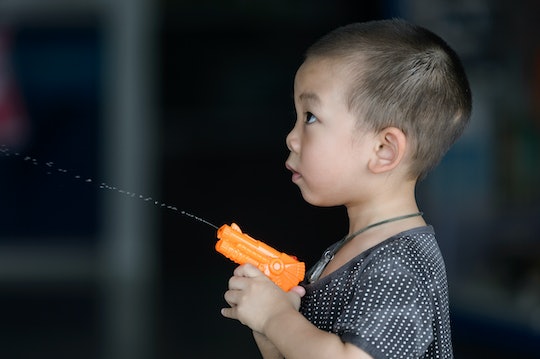 It's officially summer, which means all of the old classics are making an appearance. Our kids are going to be begging for Otter Pops, swimming in kiddie pools, riding their bicycles, and playing with water guns. But are water guns bad? Should we, as parents, be allowing our kids to play with toys that look and sometimes even function like potentially deadly weapons?

More Like This
Is The Tooth Fairy Real?
Attorneys General In Nearly Every State Oppose Facebook’s “Instagram For Kids” Plan
9 Signs Your Child Is Overheated
Here's What Your Kid Is Really Saying When They Tell You They Hate You

In the disturbing context of American gun violence, which claims the lives of nearly 3,000 children and teens every year, according to EveryTown For Gun Safety research, is a water gun just an innocent toy, or representative of something more? Romper spoke with child psychologists, psychotherapists, counselors, and pediatric trauma specialists to answer this increasingly complicated question.

Regardless of personal opinions or family policy on toy guns, it's few parents who will escape childhood (especially, the evidence shows, parents of sons) without witnessing their kid play with a toy gun. Even children who are not allowed to access toy guns in their home will often fashion one out of something innocuous, like TinkerToys or Legos. This is to say nothing about what toys they play with at friends' houses. Some parents see this as a normal part of childhood play and a healthy form of role play. Others see a perpetuation of aggressive attitudes and ideas with real life consequences. So who's right?

The truth of the matter is, research on this topic is limited and often inconclusive. Among the many experts Romper reached out to, opinions varied widely. This can, of course, be frustrating for parents who just want to do what's "best" for their children, but much of this discussion will fall on personal preference. There are, however, some universal guidelines to keep everyone safe and having fun this summer.

Kristin Hoffman, Ph.D., Director of the Trauma Psychology Program at Johns Hopkins All Children’s Hospital, tells Romper that there is no definitive answer as to whether or not a parent should allow water guns in their home or during summer play. "There is some research showing that toy gun play increases the likelihood of aggressive behavior and play in children," she says. "However, there is no data linking toy gun play in childhood with future use of real guns or harming someone with a gun as an adult."

The words, toy and gun should not belong together.

While she did not suggest a universal ban of water guns for all children, Hoffman does warn that in some instances, disallowing toy guns may be advisable. "Among children who tend to have higher baseline levels of aggressive, destructive, or active play than others their age, toy gun use may increase the chances of further aggression, potential safety concerns, and violent themes in play," she says. Sensitivity toward personal history is also an important consideration, and Hoffman points out that children who have experienced or witnessed gun violence in their own lives may be understandably frightened or anxious around even toy weapons.

So if you have decided to allow water guns this summer — either enthusiastically or begrudgingly — is there a best way to go about it? Every expert Romper spoke to stressed the importance of establishing rules for appropriate play, such as no pretending to "kill" anyone, and consequences if the child breaks them.

"Whatever the choice is by a parent ... how the toy is to be used should be an open conversation with explicit expectations and it should not be assumed that the child 'knows better,'" Dr. Molly Ansari, Assistant Professor in Bradley University's Online Masters of Counseling Program, tells Romper. She suggests that even the language we use is important. "The words, toy and gun should not belong together," she says. "A child should be encouraged to use their imaginations when they play, and there are plenty of similar items on the market (i.e., Super Soaker, Water Blaster) that do not include the word gun."

It is essential that we educate our children and ourselves about gun safety.

While it appears there's no right or wrong answer to the question of whether or not to allow children to play with water guns, all the experts who spoke to Romper pointed to the crucial importance of differentiating toys from firearms — which are found in an estimated 31 percent of American households according to a 2018 General Social Survey of the National Opinion Research Center — as well as using water guns as a great opportunity to discuss gun safety with children.

"Incidents involving guns constitute the third leading cause of death among American children," Hoffman says. "It is essential that we educate our children and ourselves about gun safety. Given that guns do not seem to be going away anytime soon, [us parents] need to do a much better job at taking responsibility for protecting our children from these deadly weapons."

It's good to approach the subject of toy guns thoughtfully, but it's more important to make sure that while we're considering the symbolism of what it means to play with a toy, we're not neglecting to protect kids from the threat it represents.