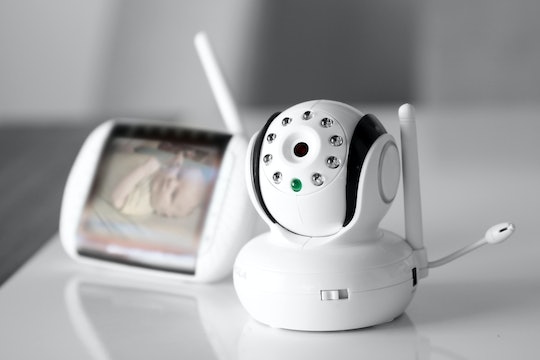 Modern technology definitely comes with pluses in the baby department. Long gone are the days of staticky audio baby monitors that screech and barely have any range. With video monitors, there's a variety of flexible options, including built-in night lights and lullabies, phone-viewing accessibility, and the ability to have multiple cameras in the house. But, are wi-fi baby monitors safe? If you're considering a wi-fi video monitor for your house, you might be concerned about the possibility of unwanted side effects around your little ones.

According to Parents, the security of these wi-fi monitors has been questioned because of the ability to publicly access mobile streams, but most options offer a high-security, password-protected wi-fi to ensure privacy. It seems unlikely that potential intruders are tapping into your baby monitor, but it's always nice to have the extra layer of security, and a little peace of mind. As Parents mentioned, as long as your home's wi-fi network has a secure connection, there shouldn't be much of an issue with hackers.

If you are worried about the security of your wi-fi video monitor, there are a few ways to ensure a more protected connection, according to Newsweek. Before buying a specific monitor, research it to make sure it's not vulnerable to any security issues and going forward, make sure you're choosing a strong password and changing it frequently. Newsweek also noted that you should register your device and make sure the software, firmware, and apps are all updated when needed. Finally, turn the device off when you're not using it — leaving devices on all the time makes them more vulnerable to hacking.

As far as the radiation exposure from wi-fi is concerned, there is no firm research yet on the subject. Ultimately, according to Forbes, the most authoritative recent study done by independent researchers stated that there is no definitive evidence that wi-fi signals most commonly experienced by children are harmful. The World Health Organization (WHO) goes further and noted that there is no risk from low-level long-term exposure to wi-fi network signals.

Most wi-fi video monitors have been deemed safe by multiple sources. If you are concerned about possible effects of your wi-fi video monitor, making sure you turn it off when it's not in use is a good precaution to minimize signal emission. (Just don't forget to turn it back on at bedtime.)