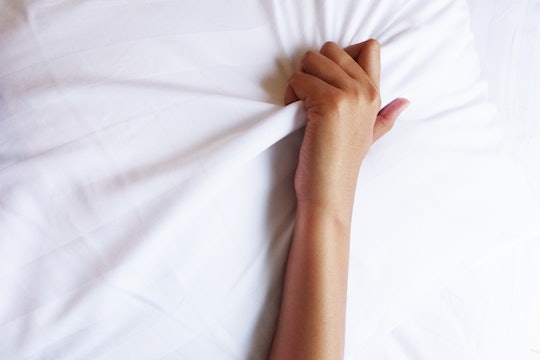 The Reason Orgasms May Be Key When Trying To Conceive

Trying to conceive can be a stressful experience for many people. After all, tracking your ovulation cycle and following other fertility advice can be time-consuming and a bit clinical. Thankfully, there may be a way to make conception sex both pleasurable and affective. So are you more likely to get pregnant if you orgasm, or is this nothing more than a myth? There's no harm in the female orgasm, but knowing whether it can tip the odds in your favor is helpful.

For starters, consider the upsuck theory. (This is a real thing, I promise.) The upsuck theory claims female orgasm might aid the process of conception by sucking sperm up into the uterus, according to the website for Salon. There's been some debate over this particular hypothesis, however, so it looks like more research is still needed. In the meantime, you're free to perform research of your own.

Another theory relies on the relaxing effects of orgasmic sex. Stress can adversely affect ovulation, making it more difficult to conceive, according to Baby Center. So, it makes sense to chill as much as possible. To this end, the oxytocin-releasing bliss of orgasm might blast the stress away, promoting conception, according to the website for Parents. Sounds like an excellent reason to slow down and enjoy the ride.

If these reasons aren't enough, consider the other potential ways female orgasm might contribute to conception. In fact, longer foreplay might help increase sperm count before ejaculation, according to Very Well. More sperm means more chances of implantation. So if your partner takes the time to help you reach orgasm, he might have more swimmers ready to go at the time of his orgasm. Everybody wins.

Whatever the reason, it looks like female orgasm only helps boost the odds of conception. But don't put undue pressure on yourself to perform. Learning how to orgasm during partnered sex is a skill like any other, according to Bustle, so don't be afraid to practice. Although getting pregnant may be the end goal, there's no reason you can't enjoy the process to its fullest potential.