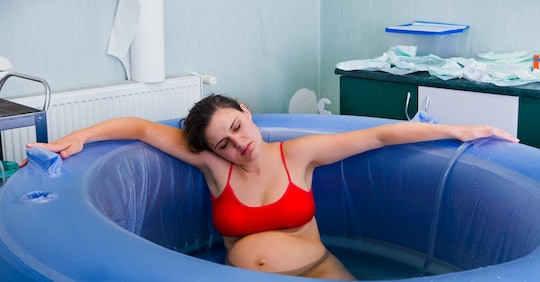 Are You More Likely To Go Into Labor During The Solar Eclipse? Ancient Beliefs Think So

"Must be a full moon." It's a phrase people apply when life starts to go sideways. Ask any doctor, and they'll tell you full moons are the worst, and pregnant women have heard plenty of jokes about going into labor during a full moon. But what about eclipses? Are you more likely to go into labor during the solar eclipse?

There is some really fun mythology surrounding having your child born during or around a solar eclipse. My favorite is that there is a celestial dragon that controls the sun, moon, and earth, and you are at the whims of that creature for the duration. Now, the psychic friends network of the middle ages did not specify directly if going into labor would either turn your child into a dragon, or make your baby a part of the dragon's hoard, but you know that there was definitely someone selling charms, or maybe essential oils to keep the dragon away from your baby.

According to Salud Publica de Mexico, in rural Mexico the belief is that a baby born during an eclipse (which they do believe brings on labor) will be born with a cleft palate or "harelipped." Not to worry, though. If you wear a safety pin at the bottom of your blouse, and tie a red sling around your belly during the eclipse, you're safe.

Personally, if I were pregnant, I would hope that my baby would end up Harry Potter talented or she'd be given the heart of the ocean, or be born with the ability to perfectly fold fitted sheets. As for childbirth, are you more likely to go into labor during the solar eclipse? There just isn't any science to say one way or the other. It's nearly impossible to do a thorough study on the impact of a solar event that occurs so rarely — the peer review would take forever.

There have been studies surrounding the effect of full moons on childbirth and also studies on the new moon, however, and researchers found that there was no discernible difference in the number of women experiencing spontaneous labor during these times.

I don't think the solar eclipse will throw you into labor unless your body has already decided that Aug. 21 is the day it's saying "no more" to being pregnant. However, I'd advise against buying any weird and exotic plants that day — it could end badly. Just ask the cast of Little Shop of Horrors.