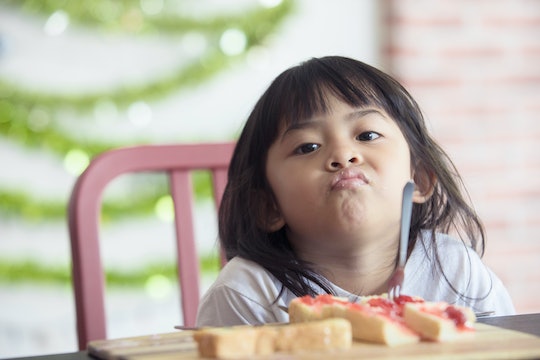 Here's How To Avoid Spoiling Your Picky Eater, According To Experts

So, you've got a picky eater on your hands. Sigh. First, let's all take a collective deep breath, shall we? Are you spoiling your picky eater if you cater to their demands? Should you insist they eat at least one healthy item on their plate in exchange for something they WILL eat (which may not be the best thing for them)? Exactly how much negotiating is appropriate in this situation? Should you throw in the towel and just let your child eat ice cream until his teeth falls out? Ah, parenting. The fun never ends.

More Like This
This Is Why Your Toddler Wants To Feed You All The Time
Apple Card Family: How It Works & What Your Kids Can Learn
The 7 Best Water Tables For Your Little Ones
15 Face Masks For Kids That Are Cute, Comfortable, & Get The Job Done

Why are kids so particular when it comes to food, anyway? Unfortunately, according to Science Direct, the jury is out on this one. NBC News reported that studies dating back to the 1990s have linked picky eaters to everything from personality traits and maternal eating patterns to parental control at mealtime and other social influences. Or maybe it's just kids being kids.. I must admit that my children have always been fairly good eaters, but believe me, they have had their moments along the way. As a result, I've gotten frustrated and taken it personally. After all, I am the one making their dinner most nights.

In an interview with NBC, Lee Gibson Ph.D., a leader in biopsychology and director of the Clinical and Health Psychology Research Centre at University of Roehampton in London, reminded parents that fussy or picky eating is normal in young kids. And parents overreacting is counterproductive. “Parental anxiety won’t help,” Gibson said. “It’s better to learn by example, always be positive when offering food and show children how much you like a food when you’re asking them to eat it.”

And oftentimes, it's really not about the food at all. It's about control. As Dina Rose, Ph.D., a sociologist and author of It’s Not About the Broccoli, explained to NBC, "As toddlers, it becomes a kid’s job to learn control — how to move and control their body and all of its functions. Choosing what foods to put on their plate and choosing whether or not to swallow that food is another area they can control." As parents, we want control over what our child eats, and thus, the power struggle begins. Good times.

Keri Glassman, founder and president of Keri Glassman, Nutritious Life and The Nutrition School, suggested a variety of solutions for picky eaters in an article for the Food Network, including presenting a variety of foods on the table, incorporating healthy foods into meals your children already like, and getting your kids involved with meal preparation.

So, assuming you've gotten your own anxiety about your child's picky eating out of the way and aren't engaging in a power struggle, how much should you cater to any residual food whims? In an interview with NBC, Sally Sampson, co-author of The Picky Eater Project and founder of ChopChop, a non-profit that teaches families about cooking together, said catering to kids’ picky preferences drives the pickiness and never gives them a reason to try new foods. That doesn't mean you have to force kids to eat a certain food: You can negotiate with them, just make sure all of the options you offer are foods you want them to eat. For example, when it comes to an after school snack, Sampson suggested putting out raw vegetables, hummus and fruit. Even if they skip the carrots and hummus and devour the grapes, they’re still making a healthy choice. (Also, recognize when it's a behavior issue and when it's a picky eating issue, as those should be dealt with differently.)

Armed with this new information, I wish you good luck at dinner tonight, friends. May the Force (and food) be with you.