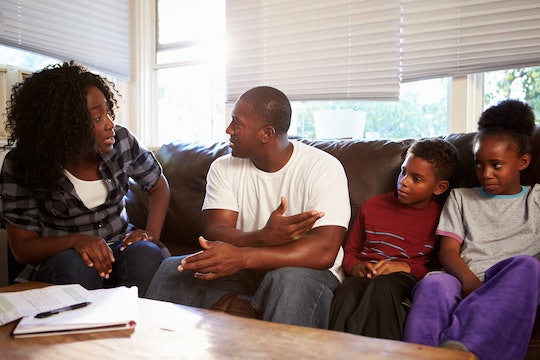 For years, parents have been told to take their fighting behind closed doors and shield their children from the conflict. But that advice and the resulting impulse may be misleading. In fact, arguing in front of your kids is good for their emotional development, according to a recent study. But don't bust out the boxing gloves just yet; constructive and healthy arguments are key.

Researchers from Washington State University found that when parents bottle up their feelings and go to blows after their kids are in bed may be doing so to the detriment of their little ones. When children see "healthy conflict" being resolved at home, they learn to express themselves in similar, positive ways, according to Science Daily.

The team conducted an experiment involving 109 mothers and fathers, put into anxiety inducing situations in front of their children, aged from 7 to 11 years old. Parents instructed to conceal their feelings were "less positive" and gave fewer positive gestures to their children, like smiling and nodding at their children, as HuffPost reported. Sara Waters, an assistant professor of Human Development on the WSU Vancouver campus and study co-author told HuffPost that “kids pick up on suppression, but it’s something a lot of parents think is a good thing to do.” Instead of suppressing, parents should let their feelings out in constructive ways.

The experiment put parents in two stressful situations, the Daily Mail reported. First, they spoke publicly and received negative feedback. The second, which sounds like a complete nightmare TBH, required them to assemble Legos with their children, without reading the instructions. Instead, the kids guided them through it. Half of the parents had to hide how they felt, while the others were instructed to act naturally. Researchers determined that when parents had to conceal their emotions, kids picked up on it. Kids are good at picking up subtle cues from emotions, Waters told the Daily Mail:

If they feel something negative has happened, and the parents are acting normal and not addressing it, that's confusing for them. Those are two conflicting messages being sent. Let them see the whole trajectory.

Instead, Waters recommended that parents show kids how to work through conflicts, Science Daily reported. "That helps kids learn to regulate their own emotions and solve problems. They see that problems can get resolved. It's best to let the kids know you feel angry, and tell them what," she explained.

But parents should be sure that they aren't "fighting" in the traditional sense in front of their kids. Rather, "arguing," or working to resolve a conflict is what works best. Psychology Today characterizes fighting as involving raised voices, bringing up the past, and name-calling. When two people fight, they are problem focused. Conversely, in arguing, people use calm voices, mutually respect one another, and focus on one singular issue. They are solution focused.

Past research has shown that that fighting in front of children can have negative effects on child development. E. Mark Cummings, Ph.D., a psychologist at the University of Notre Dame told Parents that kids are very sensitive to their parents' conflicts:

Even 6-month-olds are acutely sensitive to all types of conflict between Mom and Dad — that includes bickering, hostility, and defensiveness, as well as physical fights.

Infant blood pressure rises when parents fight nearby. While the words may make sense to them yet, they pick up on the tone and other cues. Parents who get along and work together foster their children's sense of security. "But frequent, unresolved fighting chips away at that confidence, triggering sadness, anxiety, and fear in children of all ages," Cummings told Parents.

All of this is not to say that you should provoke an argument with your partner just for the heck of it. Instead, when conflicts do arise, use them as an opportunity to show your children how to work through problems in a healthy, supportive way.

More Like This
Trans Youth Describe The Importance (& Joy) Of Family Support In Moving New Documentary
Reddit Backs Mom Who Got Scolded By Teacher For Not Inviting 30 Kids To Birthday Party
A Dad Asked Reddit If His Wife’s “Casual” At-Home Wardrobe Was Setting A Bad Example
When Does A Baby Recognize Their Father? A Pediatrician Explains
What Parents Are Talking About — Delivered Straight To Your Inbox