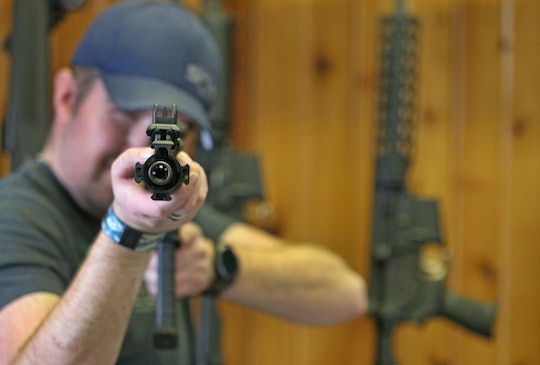 Arguments For Giving Teachers Guns, & How To Debunk Them

On Feb. 14, a 19-year-old walked into Marjory Stoneman Douglas High School and killed 17 students and teachers with a semi-automatic assault rifle. These innocent victims had their flesh and organs ripped apart by a weapon of war that a teenager should have never been allowed to legally own. Except, it was perfectly legal. Because in Florida (and most states, actually,) 18-year-olds can go out and buy an assault rifle before they're legally allowed to purchase alcohol. Nearly two weeks after the tragic mass shooting, the city of Parkland, Florida, is still in the middle of a topic of hot debate: Whether we should be arming our teachers. If you're among those who immediately think, "Oh, hell no," then I would love to "arm" you with a few of the common arguments for giving teachers guns, and how to debunk them.

The idea that arming teachers will somehow prevent mass school shootings isn't exactly a new one. However, a renewed interest in the concept has swept the nation ever since President Donald Trump declared that it definitely would have prevented the massacre in Parkland. On Friday, the POTUS addressed the Conservative Political Action Conference (CPAC), suggesting that bringing more guns into schools would actually solve the gun problem, according to The Guardian. "They're not going to walk into a school if 20 percent of the teachers have guns — and maybe 10 percent, or maybe 40 percent. And what I'd recommend doing is people that do carry, we give them a bonus. We give them a little bit of a bonus."

*Sigh* The logic behind arming teachers is just so faulty, I'm not sure where to begin. So let's start with ...

Sorry to burst your bubble, but there were actually several armed sheriff's officers on site as the mass shooting in Parkland unfolded. The Florida Sun-Sentinel reported that at least three deputies waited outside of Marjory Stoneman Douglas High School on Feb. 14 — including School Resource Officer Scot Peterson, who has already resigned. So a "good guy with a gun" (several of them, in fact) was right there during an active shooter situation — and even they refused to confront a person armed with a semi-automatic rifle. Not to mention, as VICE reported, the whole "good guy with a gun" rationale has already been debunked. John Donohue, the lead author of a working paper published in June by the National Bureau of Economic Research, summed it up perfectly, saying:

For years, the question has been, is there any public safety benefit to right to carry laws? That is now settled. The answer is no.

An Armed Teacher Would Have Been Able To Stop The Attacker

As USA Today reported, Trump suggested that an armed teacher would have been able to stop the Parkland shooter. "A teacher would've shot the hell out of him," Trump said. No. Sorry to break it to you, but a teacher with a handgun is no match for an attacker with a semi-automatic assault rifle. As The Boston Globe pointed out, teachers are not soldiers; they don't have the training or psychological ability to make a split-second judgement call about shooting or not shooting someone. Not to mention, even highly-trained professionals aren't particularly accurate in high-pressure scenarios. In fact, NYC police officers hit their targets just 18 percent of the time in gunfights, according to the publication. So why do people think teachers would be more efficient?

Indignant educators took to social media in hoards following Trump's comments about arming teachers, HuffPost reported. The vast majority of teachers, it seems, don't want guns anywhere near their classrooms. Plus, as many of them pointed out, where would the government find the money for these "bonuses?" Teachers are already overworked, underpaid, and according to NPR, are increasingly purchasing basic necessities out of their own pockets. If the government can't fund school supplies, then funding training and bonuses for teachers willing to carry guns is a joke.

Gun-Free Zones Are Magnets For Attackers

President Trump told the CPAC on Friday that schools are "beautiful targets" for attacks because they are deemed gun-free zones, The Guardian reported. "A gun-free zone to a killer or somebody that wants to be killer, that's like going in for the ice cream," Trump said. "That's like, 'Here I am, take me.' We have to get smarter than gun-free zones. When they see it says, 'This is a gun-free zone,' that means nobody has a gun except them. Nobody's going to be shooting bullets in the other direction."

Except, as Mother Jones reported all the way back in 2013, there simply is no evidence that mass shooters target gun-free zones. Whether or not teachers are armed won't deter potential attackers.

But you know what might help? Not being able to go out and buy an assault rifle in 30 minutes. Yeah, we should definitely start with that.

Until we are ready to admit the U.S. has serious gun problem, abandon our toxic gun culture, and finally put into place serious gun safety legislation — starting with the banning of assault weapons — this cycle of violence will only continue. And NRA-backers will keep using the same old invalid arguments.